Oh, How The Mighty Have Fallen

Share All sharing options for: Oh, How The Mighty Have Fallen

Chone Figgins was one of the league's better players when he was in LA, largely on the strength of good plate discipline, an above average BABIP, and good defensive numbers at third-base. The Mariners rewarded him with a four-year, $36 M contract, and things... have not gone so well.

Figgins hit just .259/.340/.307 last year, with an inauspicious move to second-base (around -11 runs across the different metrics). Quite a down season; reminiscent of his 2006 for the Angels. Figgins bounced back after that one to post a 4 fWAR in 2007, but that kind of improvement seems unlikely this year.

Instead, things have actually gotten worse. His walk rate has been more than cut in half (to just 5%) as he's chasing more pitches out of the strike-zone, and a .211 BABIP - which is lower than it "should" be, but goes along with a declining line-drive rate - is keeping his line at .185/.227/.245. Now back at third, at least he's not giving up a ton of runs with his glove, but his -1.2 fWAR is the worst mark in the majors. That's quite a tumble from the 6.9 fWAR he had in 2009, but has Figgins fallen off more than any other player in the last couple years?

* Yes, that's somewhat unfair to Figgins since it's already clear that those time-frames are when he declined. And using rest of season projections for 2011 would probably be better. But it gets to the point.

Here are the biggest drops: 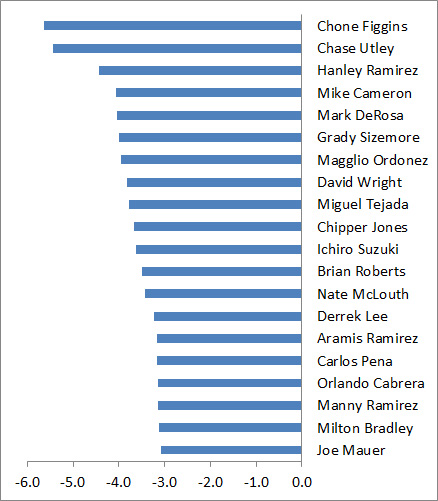 Figgins is indeed at the top, going from a 4.7 win player to a below replacement level player (though one would assume he'd improve some the rest of this year). Utley is the only player particularly close, and that's largely due to injuries. Hanley Ramirez has had a tough 2011 with his .236 BABIP, though 2010 wasn't quite up to his usual standards either. It's an interesting list, with many guys you'd expect (good players going into the twilight of their careers) and some you wouldn't (players in their supposed "prime" years).