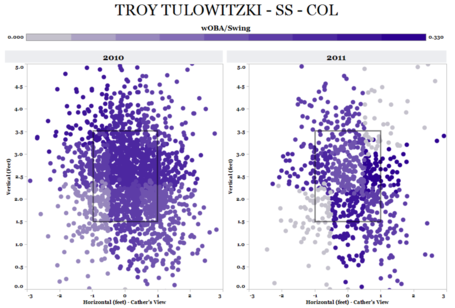 About two weeks ago, Satchel wrote a great piece arguing that while Troy Tulowitzki's outcome numbers have been down this year, his peripherals suggested that he's actually improved as a hitter.

But this season, despite the superficial drop in Tulowitzki's overall numbers, it appears that he may actually be making additional improvements as a hitter in his age-26 season. He's managed to cut his whiff rate significantly, from 6.6% to only 3.8%, and in the process he's sliced his strikeout rate in half- this season he's been sent back to the bench with a K in only 7.1% of his plate appearances.

It's true that Tulo's BABIP numbers are depressing his overall performance. As of Saturday, Tulowitzki was sporting a wOBA of roughly .356. Using my in-season batter regression tool, we might expect him to have a wOBA closer to .434 given his three-year average BABIP and HR/FB and his hit distribution to this point.

It's this discrepancy that makes me question whether Tulowitzki's dropping strikeout rate is necessarily a good thing. My initial worry was that the decrease in strikeouts might reflect a regression by Tulowitzki, not an improvement. As we've discussed previously here at BtBS, there is a negative correlation between contact rate in general and runs above average for major league hitters. One theory for why this is the case is that as hitters adjust their approach to avoid strikeouts they decrease the impact of contact when they make it. Just yesterday, Jacob looked at two hitters that successfully turned the trick this year. So how about Tulowitzki?

To test this notion I decided to look into the pitch f/x data. The graph above compares Tulowitzki's wOBA per swing in 2010 against his 2011.

The first thing that jumps out at you is the decrease in Tulo's wOBA on pitches down the heart of the plate.

As interesting as this is it doesn't help unravel what's really causing Tulowitzki's problems. However, if we split the data by fastballs versus all other pitches we do see something very interesting. 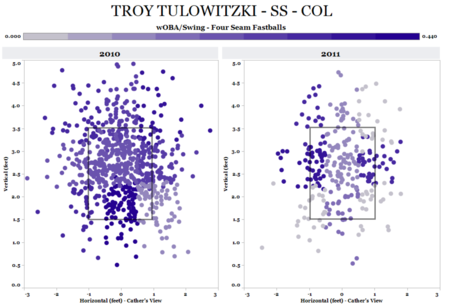 The graph above isolates the data to four seam fastballs. The heat map values are different as they calculated on a per swing basis only for fastballs. From this we see two things: First, Tulowitzki has improved his performance on fastballs middle in and middle away. Second, Tulotizki has done a worse job this year of making pitchers pay (unless you pitch for the Mets) when they throw fastballs in the middle of the zone, regardless of pitch height.

Here are some more statistics to drive home the point:

Yes, Tulowitzki is striking out less and making more contact--on other pitches besides fastballs. He's improved his wOBA/swing (.189 vs .233) and Whiffs/swing on non-four seam fastballs this year (16% vs 10%), but it appears the trade off may have been a less effective approach to fastballs. Nearly tripling your swing and miss rate on fastballs is not just a function of luck.

There is no doubt that Tulowitzki has been the victim of some bad luck, given his .231 BABIP, but my concern is that his lower BABIP is not just a function of bad luck but also of an approach at the plate that is leading to him driving the ball less in key parts of the strike zone. It will be interesting to see how this plays out the rest of the season.

You can view all of the visuals in larger, tabbed form here.