Actually, no. This year's versions of these two veteran sluggers have taken much different routes to arrive at the same (well, slightly higher) production levels. Once you delve into their peripherals, you see some surprising things. Most surprising to me is that each has drastically cut down on his strikeouts. To wit:

How can two of the most famous strikeout-prone sluggers have suddenly cut their K rate in half mid-career, all without affecting their overall production? Perhaps this graphic can help explain: 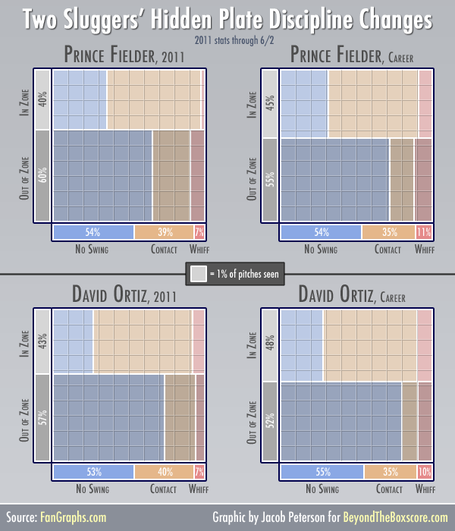 Pay special attention to the red zones, which indicate swings-and-misses. Analysis after the jump.

First off, it seems that pitchers have begun approaching these guys differently. They've been throwing 5% fewer pitches in the strike zone to each this season, compared to their career averages. Interestingly, this trend began last year for both players; Fielder's Zone% in 2010 was 39%, and Ortiz's was 42%. Both those numbers are far lower than their career rates of 45% and 48%, respectively, but this year's data proves that the dips weren't anomalies.

In 2010, however, neither Fielder nor Ortiz changed his approach. Their swing rates and contact rates were well within their career norms. Ortiz started swinging more often at pitches out of the zone, but that was the only change from previous seasons.

I would guess that both players realized they were being pitched differently, and sought to make changes in their batting style over the offseason. Specifically, it seems like they became determined to make better contact. This makes sense, if true; when you see fewer pitches to hit, it is all the more important to make contact on the ones that you do see.

Regardless of where this change has come from, the results are striking. Fielder has cut his swing-and-miss rate on pitches in the strike zone from 9.0% to 2.5%. He has hardly missed a hittable pitch all year. Fielder's whiff rate out of the zone has also dropped, from 12.2% to 9.6%. On all pitches, that's a drop from 10.7% to 6.7%. That may not sound like much, but in baseball, an extra 4% is huge (twice what the Rays got from their smartypants front office!).

You often hear hitters (and hitting coaches) preach increased contact rates, but rarely do you see such dramatic examples of this strategy being successfully applied. It is also strange to see it happen to two guys who have been around the league a few times, especially the 35-year-old Ortiz (Fielder is 27).

It should be very interesting to see what happens if/when pitchers start picking up on these new approaches, and what adjustments these two great hitters make in response.