How the Phillies Offense has Kept Pace with Last Year's Version

Share All sharing options for: How the Phillies Offense has Kept Pace with Last Year's Version 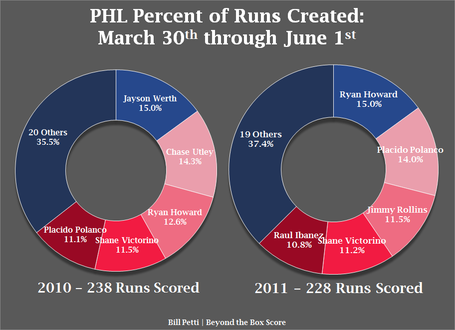 During this past off-season, the Philadelphia Phillies lost Jayson Werth to free agency. Werth accounted for the largest number of Runs Created for the Phils last year (114.9 according to Fan Graphs). Additionally, the Phillies offense started the season without Chase Utley, who has just returned from the disabled list. I, like many others, assumed the offense would naturally decline due to these losses and general ageing.

Despite the challenge of replacing Werth's bat in the long term and Utley in the short term, the Phillies have scored exactly 10 less runs as of June 1st this year compared to last year. That's a whopping difference of .18 runs per game. Yes, the Phillies have played five more games, but based on league scoring this year their offense ranks just about the same--middle of the pack. Combine that with their stellar rotation and Philadelphia actually has a better winning percentage to this point in the season (run differential is basically identical).

So how'd they manage this trick?

I took the offense from this year and last year and calculated the percent of runs created by each batter to get a sense of who has picked up the slack for Utley and Werth. The graph above plots 2010 and 2011's run created distribution side by side.

Here's what we find: