Where Are All The Runs At? Part II

Share All sharing options for: Where Are All The Runs At? Part II 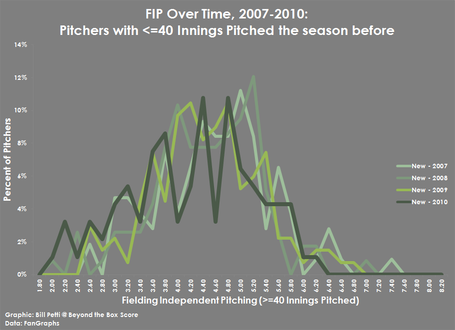 Last week I took a stab at untangling the question of whether the decreasing run environment in baseball was due to better pitchers or worse hitters. I received lots of good comments and suggestions from readers. Bottom line: it's hard to say definitively where the difference lies.

The graphic above shows the distribution of FIP each year for pitchers that either did not play the previous season or did not record >= 40 innings pitched. This could be due to injury, demotion, usage, or simply being first-year players.

Here's what the distributions like look for pitchers that did play the year before (>=40 Innings Pitched): 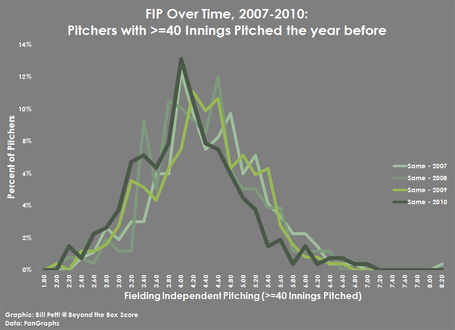 Both reflect the downward trend in FIP and run scoring across the league over the past few years. But if we bucket the distributions we see something very interesting.

We see that while all pitchers seemed to enjoy the general decrease in hitting prowess, the jump in new, elite pitchers (in terms of FIP) greatly outpaced the same change for established pitchers between 2009 and 2010. 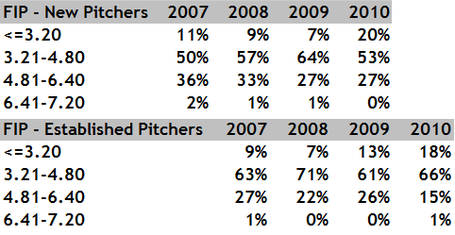 Now, the data isn't simply capturing new pitchers called up from the minors--those returning from injury or simply getting used more than the year before also make it into the sample. However, this result is consistent with the general notion that in 2010 we saw the emergence of some great young pitching.

Combine that with the increase in new pitchers in 2009 with second tier FIPs (3.21-4.80) and it provides further evidence that while hitters may have gotten worse and defense improved, we've flat out seen an influx of very good, young pitching talent over the past few years. The improving distribution of FIP in 2010 was certainly aided by the new hurlers that showed up in 2009. I am guessing we are seeing a further cascade this year.

Again, this isn't definitive, but it's pretty suggestive.

Distributions can be found here.