Identifying the Streakiest Teams in MLB

Share All sharing options for: Identifying the Streakiest Teams in MLB

People often talk about certain teams being "streaky," but this term is imprecisely defined. Is a streaky team one that has many short winning/losing streaks, or one that has a few particularly long streaks? Does a single loss end a win streak, or should extended periods of good play be counted as one "streak"?

For the purposes of this post, I decided to stick to a fairly simple way of calculating streakiness. I call this measure "Streak Games." A Streak Game is any game that is at least the 3rd consecutive win or loss--the first two games in a streak aren't counted. I've split this up into Streak WIns and Streak Losses to capture the good and bad sides of streaking.

There's more on how to calculate Streak Games after the jump if you are interested. Here are the Streak Games standings for the 2011 season (through Friday's games): 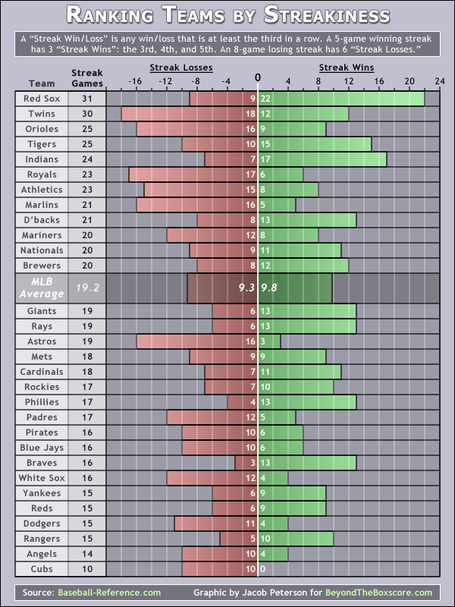 The Red Sox come out on top due to their huge total of 22 Streak Wins. That's fully half of their 44 total wins! The Red Sox have had 8 winning streaks (most in baseball), including the longest win streak this year, 9 games. They also had a 6-game losing streak to start the season, not that anyone has forgotten.

The Twins come in a close second. They are one of only two teams to have double-digit Streak Losses and Streak Wins (the Tigers are the other). The Twins' 18 streak losses lead the league, and they are also the only team to post both an 8-game winning streak and an 8-game losing streak.

By far the most streaky division thus far has been the AL Central. Four of its five teams rank in the top 6 in Streak Games; only the White Sox are not particularly streaky. No other division had more than 2 teams with above-average streakiness. I have no idea why this might be. Any theories?

On average, about 25% of a team's games are Streak Games, split more or less evenly between Streak Wins and Streak Losses. That works out to around 19 Streak Games per team. Streak Losses (25.9% of all losses) seem to be very slightly more likely than Streak Wins (24.6% of all wins), perhaps because there are more truly bad teams than truly great ones this year.

Another way of evaluating this data is to look at the differential rather than the sum. By subtracting Streak Losses from Streak Wins, we can see which teams are better at extending win streaks (and ending losing streaks). Here are the top 6:

Unsurprisingly, these are some pretty good teams. In fact, all of them but the Rays are in playoff position at the moment, and the Rays are only 2.5 back. Probably the only surprise is that one particular team is missing. The Yankees are tied with the Red Sox for the best record in the AL but are only +3 in Streak Differential, a full 10 games behind their rivals.

The Yankees have been consistently good all year, putting up 7 winning streaks, but they have yet to have a 5-game win streak (they have five 3-gamers and two 4-gamers). By contrast, the Red Sox have had four 5-game win streaks, including a 9-gamer and a 7-gamer.

On the flip side, here are the teams with the worst Streak Differentials:

The Astros... are not very good. They have had 9 losing streaks (two more than any other team) and only 2 winning streaks (only the Cubs have fewer). They haven't had any losing streaks longer than 5 games, but all those little streaks add up.

The opposite of the Astros in some ways is the Marlins. They've actually only had 3 losing streaks this season, but two of them were 11 games (longest in MLB) and 8 games (tied for 4th-longest). And those streaks came with just one win in between earlier this month. In fact, before June, the Marlins had only 1 Streak Loss (to go with 5 Streak Wins). That was the fewest in MLB at the time; now, they have 16, which is tied for 3rd-most. It really has been a disastrous month for them.

A Brief Example of How Streak Games Work

In closing, here's how to calculate a team's Streak Games total. You can do this separately for wins and losses.

If you're curious, I did think about a couple other ways of calculating streakiness, in particular ways that would have placed even greater weight on longer streaks. I toyed with a version using combinations--(Length-1)C2--as well as one using powers of 2 (2(Length-3)). Since both of these increase in an exponential manner, they are probably better measures of the severity of a given streak (i.e., the levels of elation / misery felt by the fan base during the streak) than the simple version I used above. However, since I was trying to measure a team's overall streakiness, I wanted to place a bit more emphasis on the number of streaks rather than the length.

In closing, here's a simple fill-in-the-blank for you to answer in the comments if you want:

Feel free to plug in other numbers for the streak lengths, too. I'm just trying to get a sense of what the "streak severity vs. streak length" function would look like.