Share All sharing options for: Are Pitchers Getting Better, or Hitters Getting Worse? 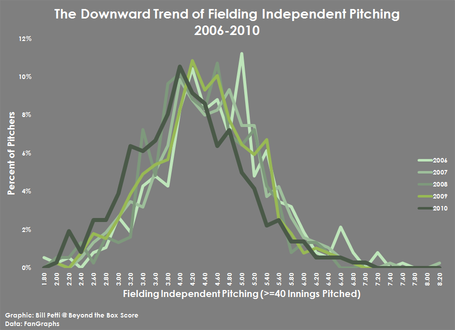 Ben Duronio and I were conversing over Twitter the other day about whether the changing run environment we've seen over the past one and a half seasons is the result of better pitching or poorer hitting. It's a hard subject to untangle using typical data, since pitching and hitting are interdependent.

I took a quick, first stab at the question. To be honest, I don't know that I've gotten anywhere, but I'll let you be the judge of that.

The first thing I did was look at the distribution of Fielding Independent Pitching for all pitchers that threw >= 40 innings during the 2006-2010 seasons. The distributions are depicted in the graphic above. You can see that the distribution of FIP didn't just move last year, but really has been trending downward since 2006 (and possibly before that, but I didn't go back that far).

Bucketing the distribution into four categories further illustrates the change:

Similarly, I looked at the flip side; the distribution of weighted runs created by hitters with >= 300 plate appearances from 2006-2010: 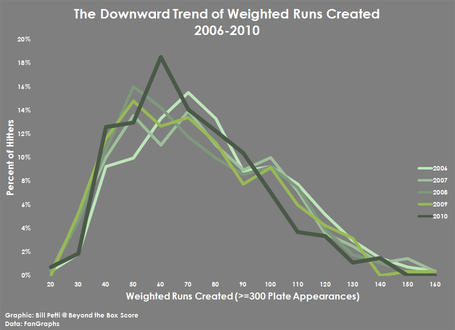 As we might expect, we see a trend that mirrors FIP, with the distribution of wRC by hitters shifting to the left year after year.

(be sure to select the wRC tab)

So what have we learned? Well, I am not sure. Generally, we see that the percentage of elite hitters (121-160 wRC) in baseball hasn't really changed much since 2008. The biggest change has been an increase in mediocre players in the 41-80 wRC area. For pitchers, we've seen a big jump in the number of above average-to-elite hurlers by FIP--an increase of 11% over 2008 and 7% from 2009.

I am tempted to say that this suggests the influx of young pitching talent has been responsible for the changing run environment, but I could just as easily say it's coincidental and those young pitchers are benefiting from a shifting distribution of hitting talent.

Bottom line: I'm back where I started. What do you think?

Full view of embedded Google docs can be found here.