As Derek Jeter approaches his 3,000th career hit (or at least will, once he returns from the disabled list) I thought it would be a fun exercise to see who else currently projects to get 3,000 hits in his career.

First, I went to baseball-reference and found the 27 hitters who already belong to the 3,000 hit club and looked at their careers. The average age each of them retired was 41 years old.

I used this 41-year old retirement age as the goal for players currently playing. If their career goes perfectly - and it has to in order to achieve 3,000 hits - how many total hits will they accumulate? And, more interestingly, how likely are they to pass the 3,000 hit threshold?

It is a very rudimentary look, but should prove to be legitimate enough to find some interesting data points.

Here are the top ten most likely players to achieve 3,000 hits in their career (through June 19th): 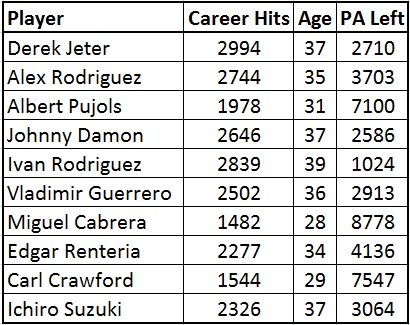 Obviously, Derek Jeter is the most likely player to reach 3,000 hits in his career. He is only six away and should easily pass that mark within the next month.

The next few players are not very surprising, either. Alex Rodriguez is only 256 hits away, with about six more years left in his career. Albert Pujols is much farther away in raw numbers, but his current pace gives him a very good probability of getting there.

Johnny Damon and Ivan Rodriguez are two players nearing the end of their careers, but who have accumulated enough hits already to give them a good shot of making it.

Here is the list for players under the age of 30: 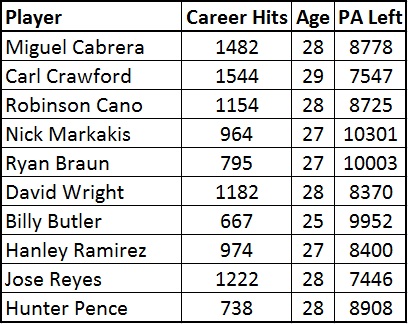 The top three shouldn't be very surprising either. Miguel Cabrera, Carl Crawford and Robinson Cano are all very well-reported as being good young players. The next guy sticks out to me, though: Nick Markakis.

Markakis was drafted by the Baltimore Orioles as the seventh pick in the 2003 draft. Most teams saw him as a future pitcher with a 90+ mph fastball from the left side, but the Orioles liked his athleticism and wanted him to be an outfielder. He was ranked as highly as 21st on Baseball America's prospect rankings. John Sickels has a great "Prospect Retro" on Markakis at Minor League Ball.

Markakis has not turned into a superstar. He placed sixth in the 2006 rookie of the year voting and has never made an all-star game. His best year so far has been the third one of his career, when he batted .306 and swatted 20 dingers. He plays above-average right field defense and is a productive regular. But he's not a star.

So why is he projected to have a relatively high probability to reach 3,000 hits, when compared with his peers? Consistency.

His power has been dropping every year and he may never return to being a 20+ home run hitter, but his OPS, with the exception of this year, has stayed above .800. Last year, he was able to do this with a walk rate above 10%. However, this year, his walk rate has dropped below 7%, his batting average is below .260 and his .074 ISO is nearly half of his previous career low.

This year will be big for Markakis's career. If he continues to lose his offensive ability every year, he may not have a job for long. However, if he can bounce back, have a strong second half and return to the level that he has shown previously, he may have a brilliant career. If Markakis can combine his apparent durability along with the ability to consistently get hits, we could be counting down to his 3,000th hit ten years from now.

This will be my last article here at Beyond the Box Score. I have agreed to join the research team at Baseball Prospectus, where I will be helping out with some statistics work along with writing articles.

I would like to thank Justin Bopp for giving me the opportunity to write here at BtB, even if it was for just a short time. I would also like to thank Adam Darowski, Bill Petti, Daniel Moroz, Dave Gershman, Matt Klaassen, Satchel Price, J-Doug, Josh Smolow, Julian Levine, Peter Hjort, Jeff Zimmerman, JD Sussman, Jacob Peterson and Lucas Apostoleris (I hope I didn't miss anyone) for the conversation, help and support.

And of course, I'd like to thank everyone who read and commented on anything I've done so far. I hope you continue to read me over at Baseball Prospectus.

Until then, I will continue writing at The Process Report, MLB Daily Dish and Steal of Home.

Thanks again to everybody!