Now that I've had some time to reflect on the Hall of wWAR a bit more, I decided to shift my focus (temporarily) from the players who exceeded the Wins Above MVP (6.0 WAR) and Wins Above Excellence (3.0 WAR) thresholds by the most total value. Today, I'm just showing which retired non-Hall of Famers simply reached those thresholds most often. 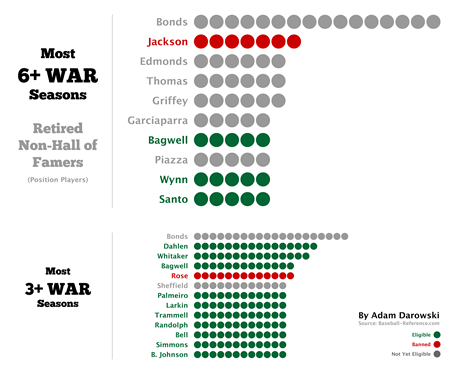 Jeff Bagwell stands out on both lists. But look above Bagwell on the 3+ WAR list. We've got Bill Dahlen, but we've also got Lou Whitaker. Several players posted a dozen 3+ WAR seasons, including some you'd expect (Barry Larkin, Alan Trammell, Rafael Palmeiro, etc.) and some you might not (Buddy Bell and Indian Bob Johnson).

On the 6+ WAR list, we not only see Jimmy Wynn and Ron Santo placing well among the eligible players, but Jim Edmonds and Nomar Garciaparra looking very impressive among those not eligible yet. (I've written about both Edmonds and Garciaparra before.)

Here are the pitchers: 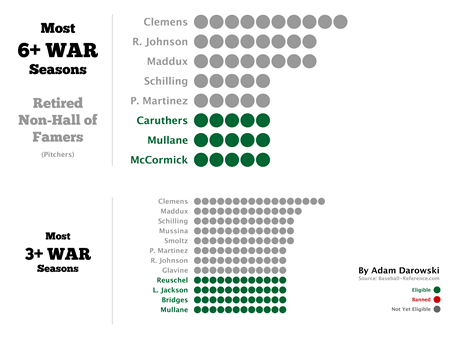 I've been a bit obsessed with figuring out who the best non-Hall of Fame pitchers are. Here's yet another way of looking at it. Honestly, I consider every single "Not Yet Eligible" (gray) pitcher in this graphic a slam dunk. I'd best most do (except maybe Curt Schilling, but to that I'd say you're nuts). McCormic, Caruthers, and Mullane have always shown up well in my research. After that, it gets interesting.

It seems that the best non-Hall position players are at most a lot better and at the very least more inspiring than the best non-Hall pitchers. Now that Bert Blyleven is in the Hall of Fame, you hear a lot of people yelling and screaming (rightfully) about Ron Santo, Jeff Bagwell, Tim Raines, Alan Trammell, and more. Which non-Hall pitchers receive support? Honestly, I'd say the best non-Hall of Fame pitcher is Kevin Brown (who just missed these lists). Reuschel ranks as the best by pure Baseball-Reference WAR. Larry Jackson was actually a Hall of wWAR inductee.

I just thought this was another neat way to look at a topic I spend a lot of time thinking about.