Comparing the Offenses of the Top AL West Contenders

Share All sharing options for: Comparing the Offenses of the Top AL West Contenders

The AL West has been a mediocre division this season (that's putting it kindly), but it has certainly been competitive. The Rangers and, surprisingly, the Mariners are currently leading the pack. What follows is a graphical comparison of the two teams' offenses, broken down by position using Weighted Runs Created (wRC).

In these graphs, each colored area is proportional to the wRC produced by that position (players are assigned to the position at which they have the most plate appearances). The dark outline underneath corresponds to the MLB averages for each position. You can click on each image to enlarge it. First up, the Mariners: 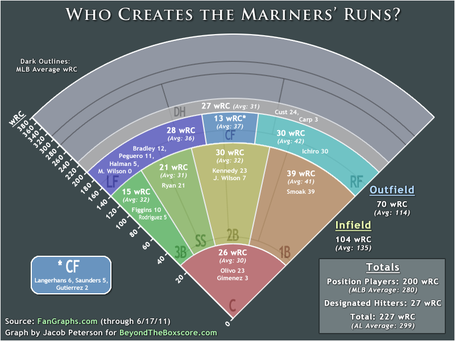 Now compare that to the Rangers: 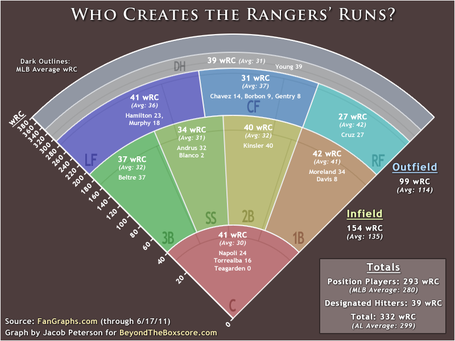 Quite a difference, no? After the jump, I analyze these graphs and offer a brief wRC primer for those who are new to that stat.

There are two ways of looking at the Mariners' hitting. A pessimistic might look at it and say that they are one Justin Smoak injury away from last year's historically terrible Mariners offense. An optimist, however, might see that there is a huge amount of room for improvement.

None of the Mariners' 9 hitting positions is performing at above the MLB average rate, and they are only near average at first base, second base, and catcher. They have recently fortified their lineup with top prospect Dustin Ackley, however. Carlos Peguero has done well thus far in left field, too. By just adding two league-average players in center field and at third base, the Mariners could easily add 30 or more runs to their rest-of-season expectation--or 3+ wins' worth. Given that they are above .500 already and playing in a weak division, that could put the Mariners in the playoffs.

One caveat about the Mariners is that there is a disconnect between their wRC and their actual runs scored. As of Friday's games, they have a 227 wRC (lowest in baseball) but have scored 251 runs (which is only 3rd-worst). That 24-run gap is huge, and may indicate excellent luck in terms of the sequencing of their offensive contributions. Or something else... I'm not sure how that might happen. Maybe some phenomenal baserunning? A side effect of playing in a pitchers' park?

The Rangers have been much more impressive than the Mariners. They have been above the MLB average at 7 of the 9 hitting positions--all except center field and right field. The Rangers also top the Mariners at 8 of the 9 positions, the lone exception being Ichiro Suzuki edging out Nelson Cruz in right field, 30 wRC to 27. Add that up and their overall wRC of 332 ranks 4th in MLB, behind only the Red Sox, Yankees, and Cardinals.

This performance is perhaps to be expected, given that the Rangers play in an extreme hitters' park, but there is also some upside there. For one, Josh Hamilton has recently returned from an injury, and if he can stay healthy for the entire year, he'll put up huge numbers. Ian Kinsler and Nelson Cruz have also had somewhat disappointing seasons, though for Kinsler, "disappointing" is still pretty darn good. If they can step up their performance, the Rangers could easily exceed this level of production going forward.

Of course, all it would take to derail that plan would be a key injury or two, or a slump from a key player. But it's hard to see the Rangers having a poor offense. Even if the Mariners improve their run production, the Rangers should have a significant edge in the hitting department for the rest of the season. Whether that is enough to counteract the Mariners' likely pitching advantage is the key question. Regardless, it should be a fun division race, and I expect it to go down to the wire. The Angels or (less likely) the A's may even join the race to make it even more entertaining.

The statistic wRC summarizes a player's total offensive contributions in one run value. The "weighted" part of the name means that different events count for different fractions of a run, so a double counts for more than a single (not twice as much, though). Each event's value is determined by historical averages for that event, adjusted to today's environment. So a single today counts more than a single 10 years ago, because the average number of runs scored is less today than it was in the go-go early 2000's.

The total number of wRC in the league is scaled to the total number of runs scored, and each team's overall wRC value tends to track very closely with its total runs scored. Thus, you can use wRC to easily portion out the credit for a team's run-scoring, as I did in the graphics. Since the Rangers had scored 329 runs (before yesterday) to go with their 332 wRC, and Mitch Moreland had a 34 wRC, you can give him credit for a bit more than 10% of the Rangers' offense.

You can read the FanGraphs primer on wRC here. The formula for calculating wRC is in this post.