Is Kyle Drabek's Lack of Control Caused by Trying to be Too Perfect?

Share All sharing options for: Is Kyle Drabek's Lack of Control Caused by Trying to be Too Perfect?

Kyle Drabek was supposed to be a star this year.  John Sickel's ranked him the #7 pitching prospect in all of baseball and a very likely Rookie of the Year candidate.  He was a big (key) part of the trade that brought the Phillies Roy Halladay, and was expected to do great things this year.

A good reason for this was Drabek's arsenal of pitches: a four-seam fastball, a two-seam fastball, a cutter, a change-up, and a power curveball which had solid movement plus good velocity (he also may have a rarely used against RHBs splitter, but it's unclear).  Drabek put up solid K/BB ratios in the minors and while he didn't K a ton of batters, had a pretty good GB rate to more than compensate.  And of course, Last year he pitched 17 solid innings over 3 starts for the Jays.

But something's happened this year and he's gone way off course.  The Groundballs aren't there.  And his control has gone insanely out of whack, with him walking more than he strikes out against both left and right handed batters, to the tune of an ugly 6.44 BB/9.

So what's gone wrong?  Well I think the graph above illustrates part of the problem: Drabek is trying to locate his pitches on one or two corners of the strike zone (depending upon the pitch and handedness of the batter).  With the cutter to lefties, he' been successful at doing so...but with his other pitches, not so much.

As you might expect from Drabek's high BB totals, he doesn't hit the strike zone very often at all with any of his significant pitches.  Here's the wide strike zone rate - a rate measuring the amount of pitches in a wide strike zone, a zone LARGER than the regulation zone - for each of his pitches against each type of batter:

Yikes.  Against Lefties, with his two most used pitches (we're talking roughly 2/3 of his pitches here), Drabek isn't NEAR the strike zone more than half of the time.  Against Righties Drabek's a decent bit better, but the numbers are still a bit low for one's liking.  Not "hitting the zone" with change-ups or curveballs is not necessarily a problem...often those pitches are aimed at the very corner edge of the zone so that they miss extremely frequently.  But a good pitcher needs to have some accuracy with his primary pitch, his fastballs.  Not so with Drabek. 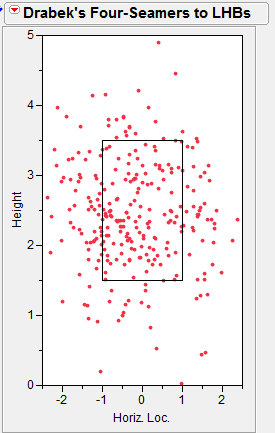 I believe that the reason for this, as I talked about above the Jump, is that Drabek is really going overboard in trying to hit the corners with his pitches.  With each one of his pitches, except maybe the curveball (which he just aims low), Drabek seems to either aim for one specific corner or to try and hit both corners with his pitches (you can see this, sort of, on the graph above).  In other words, he's really trying to hit the perfect spot.  Now there's nothing wrong with that in general - and like you'd expect, the effect is most noticeable on 0 and 1 ball counts (especially one ball counts) - these are counts where you want your pitcher to try to hit the corners and to avoid the middle of the plate.  But Drabek seems to some extent to still be locating his pitches to these spots on 2 and even 3 ball counts.  Take a look at Figure 2 below: 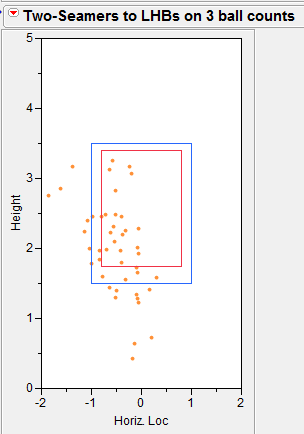 Figure 2:  The Location of Drabek's Two-Seam Fastballs to Left-Handed Batters on 3-Ball Counts.

In Figure 2, the Blue Rectangle indicates the area of a "wide strike zone," while the red rectangle shows the boundaries of what is essentially the actual called strike zone.  Now you'll notice that Drabek is locating this fastball, for the most part, in a nice small cluster of the wide strike zone.  That shows this is not really a case of a pitcher with poor control.

But, notice how more than half of these pitches (24 out of 45) are located outside of the red rectangle, which is what is essentially the strike zone called by umpires.  Many of these pitches are still close to the strike zone and are located in the wide strike zone, so it's quite possible batters, or even the umpires, could be fooled (into swinging) - and in fact, a decent amount of the time they were.  But they're clearly not STRIKES, and well on 3 ball counts, that has come to hurt Mr. Drabek.  We see similar things with all of his pitches, PARTICULARLY on 3-2 counts by the way.

Now this leads to a counter-intuitive conclusion here: I suspect Kyle Drabek could reverse his fortunes simply by throwing more pitches over the center or near the center of the plate.  It's of course dangerous to do this; no one would argue otherwise.  But Drabek is not some simple junkballer who needs to craftily hit each corner with precision to live.  This is a pitcher with a pair of 93 MPH fastballs, a 91 MPH cutter with good movement, a power curve which gets whiffs and ground balls, etc.  He HAS the stuff to thrive in the major leagues.

Drabek simply needs to learn to trust his pitches in these situations, and to thus take the chance on throwing them at the heart of the plate.  If he does, I would bet he'd find himself getting much better results.