Share All sharing options for: How Does Left-Handed Pitching Usage Affect OPS?

This is a companion post to my previous look at left-handed pitching usage. Certain players face left-handed pitchers more than others due to a large observed split in production. However, I have determined (for the purposes of this post) that it is not fair to judge players based on this. So, if we re-do the stats so that each player faced the league average amount of same-handed pitchers, what does the OPS leaderboard look like?

First, why is there not a sortable splits career leaderboard that goes beyond 2002 (If there is one, I could not find it)? Baseball-Reference has the information up to 1950, but it isn't included in the play index. Fangraphs has exactly what I'm looking for, but their data only go back to 2002. Baseball Prospectus has the information to 1950, but they only have season-by-season information. This seems like a pretty useful tool for baseball analysis. I tried to create my own database, but looking at it player-by-player with baseball-reference shows some pretty stark differences.

Second, splits information only goes back to 1950.

Lastly, these numbers are not regressed splits. They are just taken at face value.

Not many surprises here. 13 of the top 25 are still currently playing in the major leagues. Eight have retired this decade. That leaves four: Mantle, Mays, Aaron and Robinson remaining as the old-time players. But what happens when we adjust for pitcher usage? 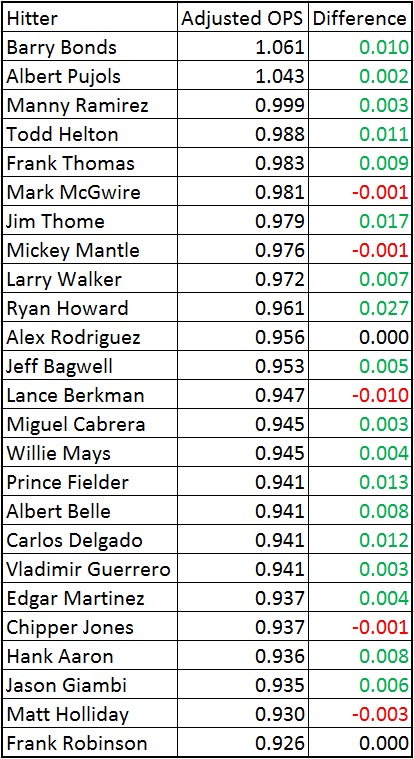 I find this interesting. The top three spots remain unchanged, but there is quite a bit of movement. The player most positively affected by this adjustment (and the original inspiration for this analysis) is Ryan Howard. he jumps up seven spots to number 10 overall in OPS.

The player most negatively affected is Chipper Jones, but that's only because the players below him moved up. His OPS was largely unchanged.

The largest positive OPS adjustment again was again Howard, with a whopping 0.027 added. The largest negative OPS adjustment was Lance Berkman at -0.010. No other player was below -0.003. Berkman has faced only 24% left-handed pitchers in his career. As a switch-hitter, this is particularly odd, but is not surprising since his career OPS split is 0.234.

I would be remiss if I wrote an OPS splits article and did not mention Roberto Clemente, so here's Clemente's corner: When I look at the value added by adjusted OPS for all players since 1960, there's a string of six lefties on top: Howard, Justin Morneau, Jim Thome, Hideki Matsui, Dwayne Murphy and Carlos Pena. However, sitting above those lefties is one lone righty: Roberto Clemente.

Now, Clemente's career splits seem to be missing some plate appearances, so there may be an issue with the platoon data. However, in the 9,655 plate appearances that are covered by the data, Clemente faced left-handed pitchers 31% of the time. In his era, right-handed hitters faced a left-handed pitcher 34% of the time. His OPS split was 0.105 in that time. Remember how Ryan Howard's OPS adjustment of 0.027 was labeled "whopping?" Clemente's adjustment is 0.038. I'm not sure what to call that. "Super-sized?"

I attempted to do some calculations to see how much of an effect this would have on Clemente's overall value, but had difficulty doing so, since OPS is a terrible player-by-player conversion to batting runs created. The overall correlation is great; I found an r^2 value of 0.891. However, the error is too large on an individual basis.

The best estimate I could find for platoon value was nearly two wins for Clemente and about one win for Howard. It doesn't appear to be as large of a difference as I was hoping for going into this exercise, but it is definitely a measurable effect. I believe that we should take same-handed pitching usage into account when we evaluate a player overall.