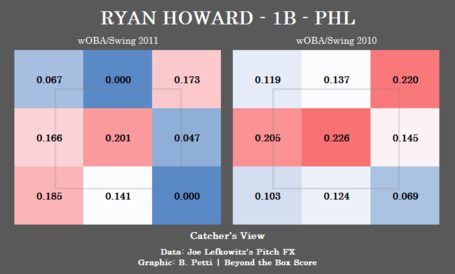 A few weeks back, Bill Baer of the always excellent Crashburn Alley, wrote a peice highlighting Ryan Howard's vanishing effectiveness when going the other way. Baer's argument in short:

Howard particularly went the other way against left-handed pitchers because they often threw him off-speed pitches that broke towards the right-handed hitter’s batter’s box. If a left-handed hitter were to pull those pitches, he would simply ground out weakly to the right side. Howard was one of the rare hitters that would not roll over on those pitches.

This season, though, Howard’s production against lefties has plummeted. As of this writing, he has a .272 wOBA with zero home runs and a .107 ISO against southpaws. The lack of production is a symptom of his inability to hit to the opposite field.

I've remarked before about how Howard has been one of the most dangerous opposite field hitters in the game. And, generally speaking, Baer is correct that Howard's opposite field power has definitely declined this year. For his career, Howard has a wOBA of .607 when hitting the ball the other way. This year, he's down to .446, the lowest of this career.

The graphic above is a heat map of Howard's wOBA per swing in 2010 and 2011 by pitch location. As you can see, Howard's effectiveness on pitches middle and away has definitely declined versus last year. Howard has seen some improvement on pitches low in the middle of the strikezone as well as up and in, but otherwise Howard has been a very different hitter this year.

Howard still has not hit a home run against a left-handed pitcher and his overall wOBA per swing against southpaws has dropped from .151 last year to .113 this year. Howard has managed to take greater advantage of right-handed pitchers, however, which has allowed the slugger to put up respectable numbers so far. 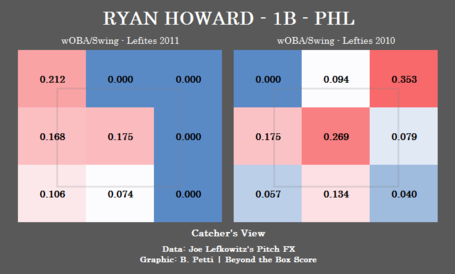 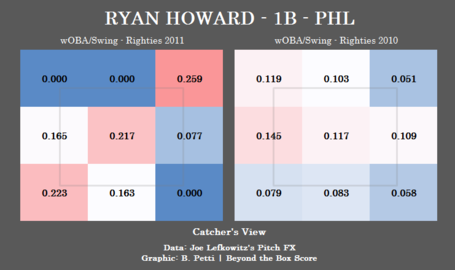 One of the biggest difference has been Howard's performance against pitches down the middle and low in the strikezone against righties and lefties. It's almost as if Howard switched his profile against these pitchers from last year to this year.

The other major difference is Howard's performance on pitches high in and out of the zone. He's simply not getting any real value when he offers at those pitches, fastball or otherwise, regardless of the handedness of the pitcher.

Now, we have to be careful since the sample sizes get pretty small once we start cutting the data by pitcher handedness, pitch location, and pitch type. However, the overall story seems to be a lack of effectiveness on balls up and out of the zone for Howard.

Howard was never a beast on high pitches--his swing was always more effective when he was able to extend his arms to pitches middle-away and medium to low in height. But this year, Howard seems to be doing even less with them than he has historically.

So Bill Baer is right that part of Howard's problem lies in an increasing ineffectiveness against lefties, but there seems to be more to the story. Howard's is suffering a power outage against southpaws, but he's still managing to be somewhat productive on balls away. Inside and down the middle is another story.  Combine that with his ineffectiveness on balls up in the zone, and Howard's .020 drop in wOBA isn't that surprising.