Not Just Black And White: Color Surnames In MLB History

Share All sharing options for: Not Just Black And White: Color Surnames In MLB History

Many common American surnames are based on colors. As of 1990, "Brown" was the 6th-most-common surname in America, "White" was 14th, "Green" was 35th, "Gray" was 69th, and "Black" was 149th. These names have all been common in major-league history as well.

I decided to do some research to figure out which of these color surnames has been the most successful in major league history, using Baseball-Reference's WAR as the measuring stick. I also threw in "Blue," which has been the surname of a couple notable major leaguers. I accepted only very minor variants of a name: an extra "e" to make "Browne" or "Greene," plus the British spelling of "Grey." Here are the results: 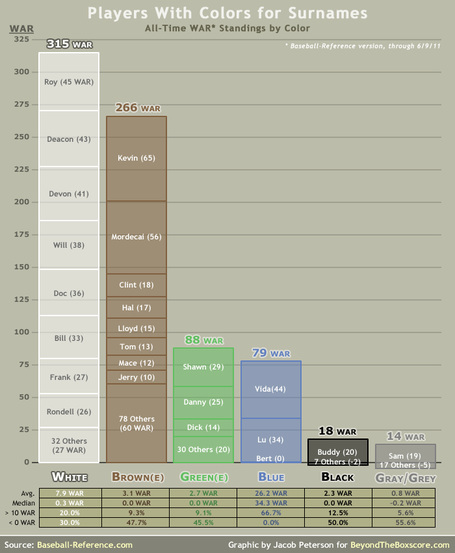 After tabulating the results, "White" came out on top. While "Brown" had the top two color-named players in MLB history (Kevin Brown and Mordecai "Three-Finger" Brown), there were no other star players with that name. "White," on the other hand, had 8 players with at least 25 WAR, led by Roy White, Deacon White, and Devon White. All of this despite there being more than twice as many players named "Brown" (86) than "White" (40). "White" was also helped by having relatively few players who came in below replacement-level: 30%, compared to around 50% for most other names.

Coming in a distant third was "Green," which featured solid careers from Shawn Green and Danny Green, but not much else. There have been only 7 fewer Greens than Whites, but the Whites have accrued 227 more WAR.

Right on the heels of "Green" was "Blue," which finished in 4th place despite only having 3 MLB players to its name. Of course, two of the three players were Vida Blue, the longtime A's ace, and Lu Blue, the 1920's 1st baseman who was sort of like that era's John Olerud, though with a bit less power. By average or median WAR, "Blue" easily comes out on top.

Finishing in 5th place is "Black," a name that I thought would do quite a bit better than 18 WAR. After all, Buddy Black (the current Padres manager, not the 1950's pitcher) was worth almost 20 WAR all by himself. Unfortunately, the other Blacks combined to be worth negative WAR, and there were only 8 Blacks in all. The only one other than Buddy to be worth even 1 WAR in his career was Joe Black, who finished with 3.4 WAR.

"Gray" brings up the rear, finishing slightly behind "Black" despite having more than twice as many players (18). The Grays had the same problem as the Blacks: one good player (Sonny Gray) surrounded by a bunch of negative-WAR players. Only 2 of the 18 Grays were worth more than 2.1 WAR in their career (Sonny and Ted). The Grays also had the worst player in the data set, the early-20th-century pitcher Dolly Gray, who came in at a whopping -6.0 WAR.

Aside from these six, no other English-language color surnames have appeared in MLB, though there have been many variant names based on these and other colors ("Whiteside," "Redmond," "Greenberg," "Browning," "Blackburn," etc.). There have also been a few names that are color words from another language, such as the Spanish "Blanco" and the German "Braun," "Schwartz," and "Weiss." And, of course, there are numerous color-based first names or nicknames. All those will have to be fodder for another post, though.

Finally, I used the frequency that each name appeared in the overall population (again, as of 1990) to estimate the expected number of players with that name in MLB history.

I really thought "Black" would be more common in the general population. Overall, the only name to be more common in MLB is "Blue," and there have been only 3 Blues. All the other names were less common in MLB, though they were more or less in the same proportions in baseball as in the rest of the country.

I hope you enjoyed this detour into silly trivia. My apologies to all those who hoped to learn something useful. Maybe next time!