Do the Number of Days Off in the Playoffs Matter?

Share All sharing options for: Do the Number of Days Off in the Playoffs Matter?

Sometimes when the playoffs roll around, a team will bulldoze their opponents and have to stay idle for a few extra days before playing their next opponent. Throughout the waiting days, a discussion will form on whether or not it is profitable for a team to have so many days off. Will they be well-rested or rusty? I decided to gather the data for myself and take a look at this very issue.

I compiled team performance in each round of the playoffs since 1995 and looked at how many days they and their opponents had off before each series. This also includes time off between the end of the season and the first round. The data come from baseball-reference. A majority of the time, (132/224 times) both teams have had exactly the same amount of days off between series.

There is a possible problem if we just look at team winning percentage in the next series versus days off. Better teams are seemingly more likely to win a series and have more days off between series as a result. So, I did a simple Log5 winning probability calculation for the teams, which excludes home field advantage. Then, I subtracted the team's actual winning percentage in the series from their Log5 probability to win the series. This should give a somewhat more viable variable to look at.

Also, once we get out of the one to three games off range, the samples get very small - almost to the point of being useless. Obviously this isn't good for analytical purposes, but if something has only happened five times in 15 years, there may not be much use for critical analysis anyway. So take this for what it is - a purely empirical look at historical data. 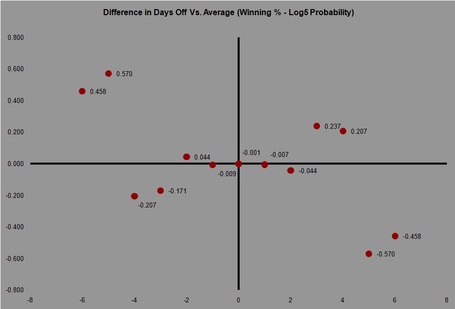 Of the 66 times two teams have had the same amount of days off between series, those series have gone basically exactly as planned. The average difference between the log5 winning probability and the actual winning percentage for each team is very close to zero. However, once we stray from this, we do see some separation. Teams that had one day off more than their opponent lost a few more games than they maybe should have. This is also true with teams who had two days off more than their opponent. However, teams with three-to-four days off more than their opponents actually performed a little bit better than their Log5 probability. We will find a bit later, however, that even though teams with one more day off won fewer games than they should have, they still did not lose the series more often. 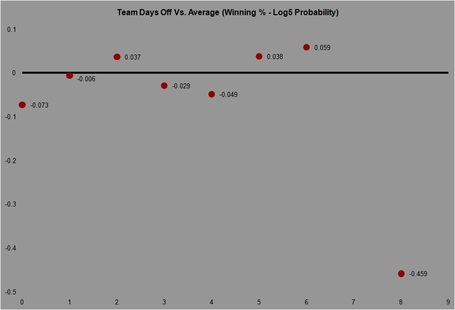 What conclusions can be drawn here? Again, it's very difficult with such small sample sizes everywhere. But here's a simple chart compiling the findings: 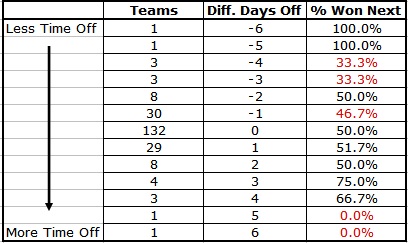 It seems that having a little bit more time than your opponent to rest is a good thing. However, both teams that had at least five days more rest than their opponent lost the next series.