Pitches Saved Since 1988, Or Greg Maddux Is A Wizard

Share All sharing options for: Pitches Saved Since 1988, Or Greg Maddux Is A Wizard

Please welcome Jacob Peterson, our newest contributor and sabergraphic artist at Beyond the Box Score. He will generally be posting bad ass charts and graphs related to statistical awesomeness and other sabermetric weirdness. -ed. 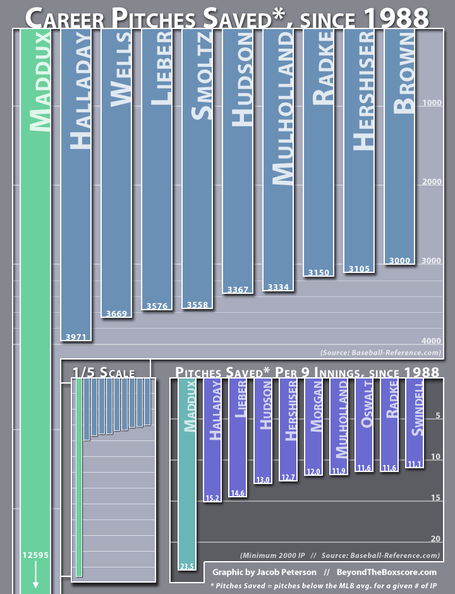 While I am never surprised to see Maddux at the top of any modern-era pitching list, particularly one that relates to pitch efficiency, that is simply a gigantic gap between #1 and #2. To put it in perspective, consider this:

At his current rate of pitches saved, #2 pitch-saver Roy Halladay could throw 250 innings per year for 20 years and still not reach Greg Maddux's career total.

I hope your mind is as boggled as mine was when I did that calculation.

A league-average pitcher generally needs around 145 pitches to get 27 outs. That figure was lower before the steroid era, and a little higher in the late 90's; it's been at around 147 in 2011.

I watched Maddux pitch every 5 days for 11 seasons, and even I was blown away by those numbers.

Another surprise that I encountered when researching this is the high ranking of various marginal pitchers, like Terry Mulholland, Mike Morgan, and Greg Swindell. While these guys were not pitchers of the same caliber as Maddux or Halladay, they did hang around for a long time. Perhaps one of the reasons they were able to have such long careers was that they were so pitch-efficient.

One final note: from 1988 to 1998, the pitch information for a certain number of plate appearances is missing. This usually amounted to only a small proportion of each pitcher's total (Maddux had 320 missing PA out of 19576 total, or 1.6%). To get around this, I simply pro-rated the pitch totals to account for the missing PA.