Oh What a Difference a Year Makes (or Not)

Share All sharing options for: Oh What a Difference a Year Makes (or Not) 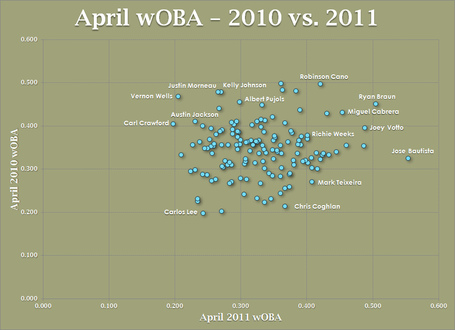 I've been looking at first month batter performance data for another project and thought it would be interesting to see how players performed this April compared to last year. Keep in mind, there's basically no correlation between April performances (r=.075 for 2011 and 2010).

In the graphic above we see hitters plotted based on their 2011 April wOBA (plate appearances for 2011 >=60 - horizontal axis) and their 2010 April wOBA (vertical axis).

Overall, the average wOBA for these players is down a bit from .346 last April versus .329 this April. Here's a few highlights for individual players:

Yearning for the past

Same as it ever was

Here's a list of all players in the sample: