An Early Look at Ike Davis' 2011 Plate Approach and Production

Share All sharing options for: An Early Look at Ike Davis' 2011 Plate Approach and Production 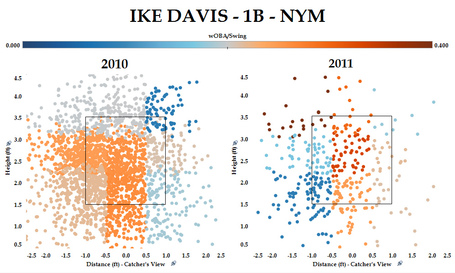 The Mets' young first baseman has followed up his solid rookie campaign with off a fantastic first month of 2011. Ike Davis has so far put up a triple slash of .317/.398/.564 and a wOBA of .410, all significant jumps from his 2010 numbers. Davis' stats have been helped by a hefty .365 BABIP and a 15.6% HR/FB ratio, both higher than 2010. However, even if you regress Davis' performance to date to his career rates on those two metrics he still comes out with .367 wOBA--a difference of one HR, one 2B, and two singles.

The first month of the season is just that--the first month. A few balls bounce one way or another can make a player look very different from what they truly are. That being said, a strong April bodes well for any hitter. (The past two seasons, April wOBA correlated to end of season wOBA at about .54.)

Davis' hot start has lot's of folks talking about what his potential ceiling is. So here's the question: does Ike's strong April indicate he's set for an improved 2011 campaign, or this just the result of a few balls bouncing his way? In other words, is Ike the same hitter as last year or has he changed?

To answer this question I decided to look at Davis' Pitch f/x data from 2010 and compare it to small sample we have from March/April of 2011 to see if anything has changed with Davis' approach. The chart above plots Davis' wOBA per swing for each of nine pitch locations in 2010 and 2011. My initial pass at the data leads me to believe he has changed his approach a bit.

We see clearly that Davis loves the ball middle and out over the plate as well as low in the strike zone. Last year, Davis hit 18 of his 26 home runs on pitches in those zones. This year, three of his five home runs came from the same locations.

In terms of pitch location, pitchers are generally approaching Davis the same as last year. 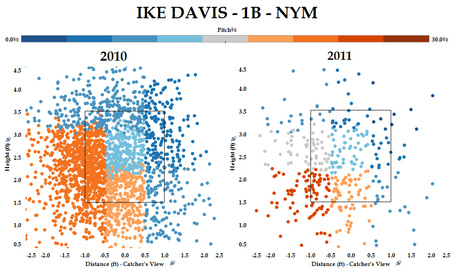 Davis has generally produced the same impact on pitches in similar zones year over year. He does have two early home runs on pitches middle-up, however (totaled three all of last year). The one area he has seemed to get worse though is on pitches low and away. 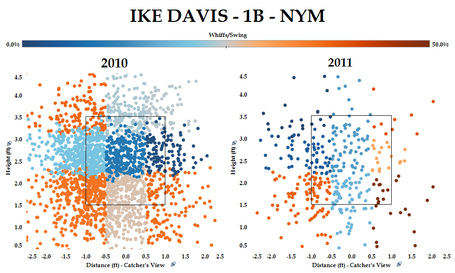 Last year, Davis saw 21% of all pitches in that zone. He only offered at 26% of those and whiffed on 36% of those swings. He finished the year with a .217 wOBA/swing on pitches low and away. This year, Davis has seen 24% of all pitches thrown to that zone and has essentially offered and missed at the same rate (22% and 38% respectively). The difference is he has a wOBA of only .085 in that zone this year. So while the swing and whiff rates are the same, the trade off for pitchers to pound that part of the zone has increased in their favor. Moreover, Davis is making pitchers pay a little less if they miss middle away (.163 wOBA vs. .248 last year).

The only big difference I see right now is that Davis is destroying pitches in the middle of the plate (high, medium, and low height), particularly against right handed pitching. He's making pitchers--mostly righties--pay for mistakes more this year than last year. 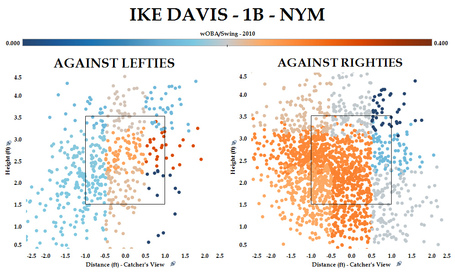 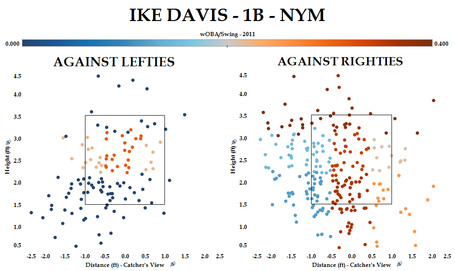 We also see this show up in his line drive rates. In 2010, Davis hit a line drive on only 3.8% of pitches in the heart of the plate. This year, that number is up to 13.5%. Generally speaking, Ike has more than doubled the percentage of line drives per pitch in 2011 (2.1% vs. 4.8%) and this jump corresponds to his overall increase in LD% (16.4% vs. 19%). This certainly would help account for the jump in his BABIP early in 2011. Additionally, he's also been more aggressive on these pitches early in the count, swinging at 15% of pitches in the heart of the plate on the first pitch versus only 7% last year.

Davis does seem to be approaching his at bats differently this year. He's being more aggressive on fat pitches early in the count and making the most of his swings on middle of the plate pitches. Davis is likely to cool down a bit as his BABIP regresses, however the true test for him will be how pitchers adjust going forward. He can count on pitchers to keep pounding him low and away. The key question is will Ike lay off or at least do more with those pitches than he's down so far?

The graphs above were created using an interactive visualization of Davis' Pitch FX data. The data was taken from Joe Lefkowitz's site.

The visualization can be found here in tab form (note it is not interactive).