Share All sharing options for: Introducing the Traditional Manager Index

There aren't many stats for measuring managers, aside from raw win-loss totals. This is largely because most of the effects that a manager has are either difficult or outright impossible to quantify.

Well, I don't have a stat to help you assess managers, but I have come up with a junk stat that I think will at least tell us something about managers' personalities. I call it the Traditional Managing Index, or TMI*, and it's very simple. It consists of two statistics that can largely be attributed to managers:

The higher a manager's TMI, the more "old school" his in-game managing style is. Take a look at the TMI results for 2011 so far: 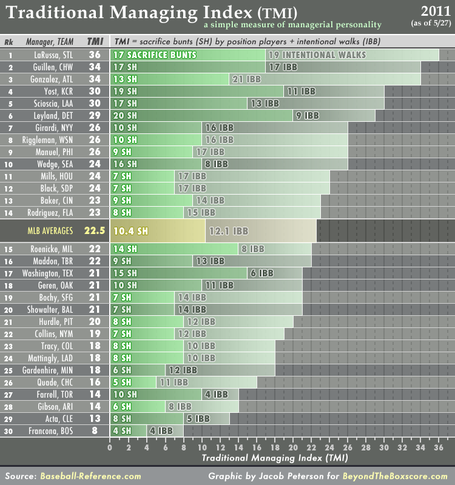 Here are some observations about the above graph:

All in all, this was an interesting exercise. TMI is not really a useful stat (few of my junk stats are), but it does seem to offer some new information. All of which makes me want to go back to previous seasons and see how consistent managers' numbers are from year-to-year.

One final note about the process: I didn't count any bunts or walks that increased the WPA of the manager's team (with the exception of sac bunts that had a positive WPA because of a fielding error). These positive-WPA plays are obvious decisions that do not tell us much about a manager's personality, because every manager will make the same choice. All told, I eliminated 21 bunts (including 8 squeeze bunts) and 7 intentional walks from the data set. That's out of 332 total bunts and 371 total walks.