The Amazing Pitches of the Phillies 19th-Inning Pitcher: Wilson Valdez

Share All sharing options for: The Amazing Pitches of the Phillies 19th-Inning Pitcher: Wilson Valdez

In the 19th inning of yesterday's long Phillies-Reds game, the Phils decided to roll the dice and try out a brand new reliever: Wilson Valdez.  Valdez had never pitched a single major league inning; in fact he had never pitched a single minor-league inning!  But the Phillies decided to take a chance on this newcomer and despite hitting Scott Rolen, their gamble was rewarded.

So of course, I was curious: what exactly does this Wilson Valdez throw?  A quick pitchf/x look at the guy reveals at least three different pitches, at least two of which have some interesting potential.  Clearly the Phillies might have something here. 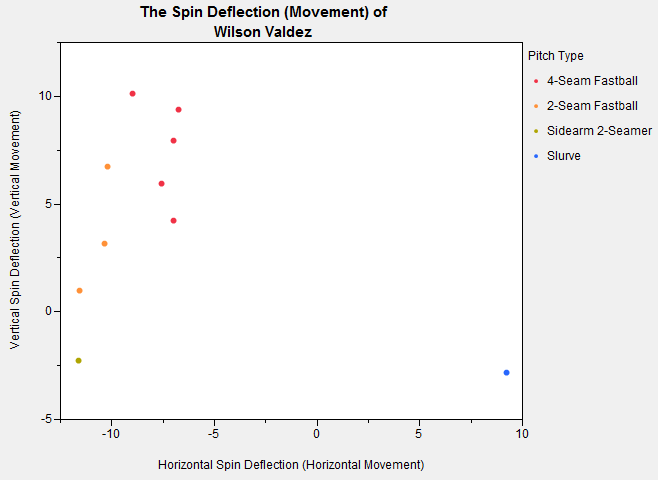 Figure 1:  The Spin Deflection, or movement, of Wilson Valdez' pitches.

Table 1:  The Movement and Velocity on Wilson Valdez' pitches.

There's nothing notable really about Valdez' four-seam fastball - it doesn't have particularly great movement and it obviously lacks good velocity.  But his other pitches are all quite interesting:

The regular two-seam fastball has good sink, which might make up for the lack of velocity.  As a standard two-seam pitch, it had good tailing action in on right-handed batters, too.

Valdez also threw what i've termed a "late release" two-seam fastball (Note I've mistakenly called it a side-arm fastball in the graph above).  I'm using that term to describe it because the pitch was released from a similar horizontal release point as his other fastballs, but over 6 inches lower.  This makes me think that the pitch was essentially released a little bit later in the windup, resulting in its strange movement.
This pitch had an INSANE amount of sink for a fastball, making it a VERY intriguing pitch.  Unfortunately, Valdez didn't have control of the pitch in this outing - his one late-release fastball was thrown roughly three and a half feet outside.

Valdez also showed a slurve as a breaking pitch.  The pitch has poor velocity (only 75.4MPH) but has a great amount of horizontal movement.  I mean we're talking about a pitch that has a horizontal break 20 inches different from the same pitcher's fastballs.  That's Aroldis Chapman-like, though Mr. Chapman gets an extra 15MPH on his slider.  Still it has potential.
Once again unfortunately, Valdez showed little command of his single slurve yesterday.  Despite the pitch tailing nearly 10 inches away from right-handed batters, Valdez managed to actually HIT a right-handed batter.  Essentially, he aimed the pitch at the same location he aimed the late-release fastball, but the opposite horizontal movement made the pitch move from being behind the batter to HITTING that same batter.  An odd result.
In addition, the slurve was thrown from a sidearm angle, while most of his other pitches were thrown at an overhand angle.  This could give away the element of surprise that the slider present to opposing batters.

Speaking of Release Points, should Valdez become an effective reliever, he'll need to work on consistently releasing his pitches from a similar point.  While some minor inconsistency of release points is expected from any pitcher, Valdez' release points - even excluding his late-release and sidearm pitches - were all over the freaking place.  That will hurt him in his quest to gain good control over his stuff, which he'll need to succeed.

The Phillies may have an interesting gem here in Valdez.  He's got some crazy movement on two of his pitches, though they both have release point issues, and he has a nice normal two-seam fastball as well.  He could certainly be a guy who gets ground balls with the fastball, while getting whiffs with the slider, should he learn to control such pitches (I'd ditch the four-seamer as much as possible though).  All in all, he demonstrates once again:  when late in extra innings, a team should take chances on the new guy.  Maybe they'll fine the next great closer, after all.

*NOTE:  I have no evidence that Valdez' pitches in orange are two-seamer as opposed to four-seamers....could just be the result of an inconsistent delivery of an untrained player.  But for the sake of this post, I'm listing them as two-seamers as I would for any other pitcher.