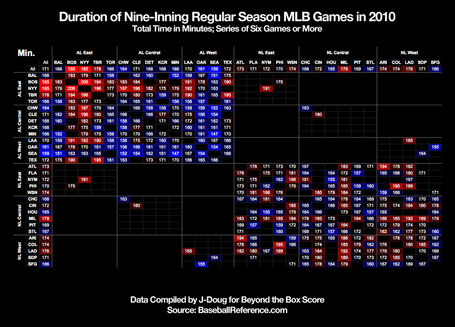 It was about this time last year that I made my sabermetric blogging debut with a study on game duration and Umpire Joe West's consternation that the Yankees and Red Sox slow down the game. In future posts I shall revisit what makes long games long, but today I focus on basic facts and figures.

Turns out Cowboy Joe was right, and still is. The AL East rivals led baseball at 3:05 per regulation game during the 2010 regular season. That figure jumps to 3:26 when they play each other, easily the longest among match-ups in which both teams faced each other at least six times.

The two teams are pace laggards as well. Games involving the Yankees elapse 1:03 before reaching the 100 pitch mark, followed closely by the Red Sox at 1:02. Playing each other, they require 1:06 to reach said threshold, second only to the Mets-Yankees Subway Series (1:07). The average match-up was 59.6 minutes per hundred pitches (MCP; see game pace chart after the jump).

The good news (or bad news, for those of us who can't get enough baseball) is that these numbers are down from 2009, during which the average game ran 2:56. 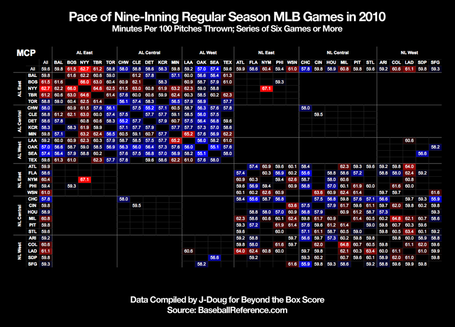 On the other end of the spectrum we have the heroes of brevity: the Seattle Mariners averaged only 2:38 per game. Their NL counterparts, the Houston Astros and the San Francisco Giants, both averaged a mere 2:45. The fastest paced teams in their respective leagues were Oakland Athletics (57 MCP) and the Chicago Cubs (57.8).

The quickest qualifying match-up of 2010 was Minnesota-Seattle at 2:27, while the fastest-paced was Oakland-Seattle at 55.1 MCP.

If I were an Athletics or Mariners season ticket holder, I might consider asking for a small fraction of my money back.