Why Can't Pitchers Deal with Jose Bautista by Throwing Outside and Giving Him Nothing to Pull?

Share All sharing options for: Why Can't Pitchers Deal with Jose Bautista by Throwing Outside and Giving Him Nothing to Pull?

Jose Bautista is ridiculous.  He's clearly right now the best hitter in baseball.  But what's curious about Bautista is that he's not mashing in a way that's particularly balanced....as you can see from the hit-tracker graph above, Bautista is a guy who basically always pulls the ball to left field when he gets the ball in the air (particularly on home runs).

So this raises the question:  why do pitchers give him something to pull?  Why not simply pitch Bautista away-away-away?  Well, actually pitchers have been trying to do just that as Table 1 shows below:

Table 1:  This Table shows the average horizontal location of pitches to Jose Bautista and how that compares to pitches faced by other right-handed batters.  The right-most column shows how the average pitch location ranks in terms of the extent outside it is against  Right-Handed Batter.

Table 1 makes it pretty clear that pitchers have been trying to simply pitch as far away as possible to Jose Bautista over the last two years - only a few (6 in 2010, 5 in 2011) batters have gotten a more extreme treatment, and not by TOO much.

However, this pitch strategy against Bautista...isn't doing much good. 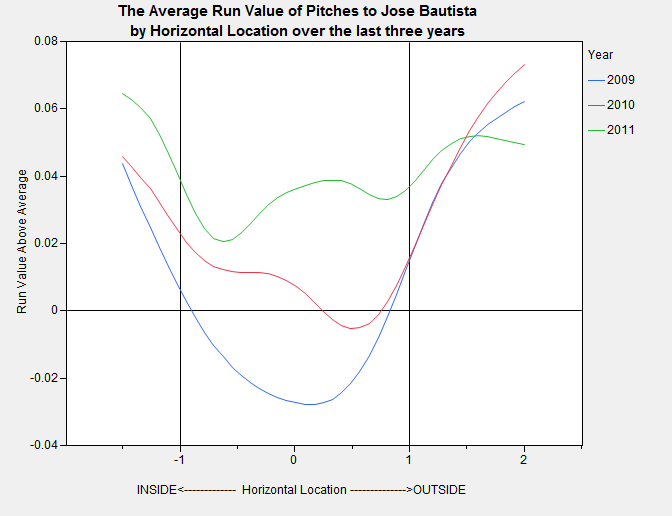 Figure 1:  A chart showing the effectiveness (using run values) of pitches against Jose Bautista based upon their horizontal location.  The more positive the run value, the better a batter is doing on such pitches.  The vertical lines illustrate the borders of a wide strike zone.

Figure 1 shows the effectiveness of pitches against Jose Bautista based upon the pitches' horizontal locations.  In 2010, as you can see, pitchers could minimize the damage against Jose Bautista by pitching on the outside of the plate.  Note that Bautista was still quite solid (See the note above) outside, with his performance on such pitches still being a good bit better than the average right-handed batter against pitches in this horizontal location.  But this was clearly an area where pitchers could feel relatively safe against Bautista (as long as they didn't miss).

In 2011, however, this weakness of Bautista has essentially disappeared completely!    And it's not just that Bautista's performance has been pretty good against outside pitches this year - it's been INCREDIBLE (better on average than any other place in the strike zone last year, in fact).  In fact, Bautista's performance has been the best against pitches that are around 6 inches away from the middle of home plate.

What's happening here?  Well, Bautista's still pulling the ball, even when it's away!  Bautista has hit 6 of his 19 home runs on pitches that are roughly 6 inches away from the middle of home plate, and FIVE of those were pulled to left field (one was an opposite field home run).  In essence - it appears that simply keeping the ball away from Bautista is not preventing him from pulling the ball in the air.

This does NOT mean that Bautista has no holes a pitcher could theoretically exploit.
See, Figure 1 is slightly misleading.  See that little downward bump on the very outside edge of the plate (at around +0.75)?  That's actually a point where Bautista has been slightly (key note on slightly) worse than average so far this year (admittedly on a small sample size of 81 pitches).  However, if a pitcher aims for that spot and misses just 2 inches inside, Bautista HAMMERS the ball, even though such a pitch would still be clearly on the outside part of the plate.  If the pitcher misses 2 inches away, Bautista simply has taken the pitch for a ball.  Thus this hole's existence is not much comfort to a pitcher.*

*The Hole isn't obvious on the graph above because of the smoothing involved in plotting the lines for each year.  Since the "hole" is between two "hot" spots, the smoothing reduces the hole to a mere dip in the path of the line.

In addition of course, the graph above doesn't look at the height of pitches faced by Bautista....while away pitches in general have been mainly still crushed (and pulled) by Bautista, for example, ones that are in the high part of the strike zone have given Bautista some minor problems.  So once again, there are places where Bautista is beatable....but pitchers really really can't afford to miss.

Figure 1 should also make obvious a key point about Bautista - or really any batter: simply walking him and pitching around him will do more harm than good.  Note how the run values on pitches to Bautista - the most dangerous hitter in the majors, are still at their highest when pitches are out of the zone entirely.  Despite how great he's been on pitches in the zone, it's still better on average to challenge Bautista then to avoid him entirely.

Jose Bautista is pretty ridiculous, and this year he's simply on another level.  He's managed somehow to take what would be his obvious weakness - pitches outside that are harder to pull - and make it into a strength...despite not really changing his batting strategy (he's STILL pulling nearly everything in the air).

Will he keep this up?  Well that's another question....though I'd speculate the answer is no.  It's hard to imagine that a batter of his type can simply mash and pull pitches so clearly away like they're inside instead of away.  But he's done so through almost a third of the season, and if he can keep it up....well pitchers should be afraid.  Very afraid.