Do Hot Teams Perform Better in the Playoffs?

Share All sharing options for: Do Hot Teams Perform Better in the Playoffs?

Stop me if you've heard this before: "The team that wins the World Series is the one that happens to get hot at the right time." Or "it's not how you start, it's how you finish." Actually, don't stop me. Keep reading. Has this been the case in recent history in the Major Leagues? 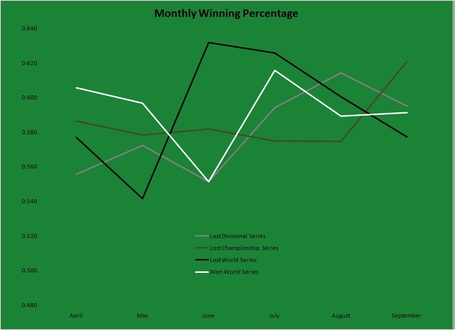 If we just look at the difference between the average season winning percentage and the average September winning percentage, the same trend appears. Perhaps the hottest teams are able to ride their winning streak up until the championship series. But that's where it usually ends. The coldest teams ride their losing streak...to the World Series. The World Series winners tend to stay pretty consistent throughout September. 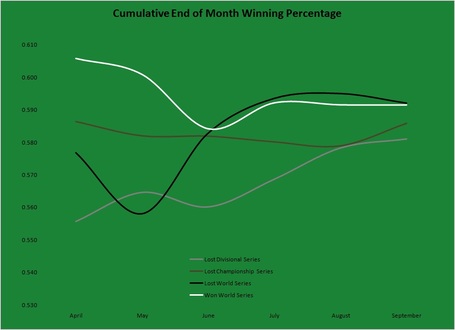 While it is possible that the definition of "hottest" team only applies to the last few weeks of the season, I unfortunately do not have the data for that. But, just by looking at data since 1995, there is no relationship between having a better September winning percentage than everyone else and winning the World Series. However, recent World Series winners have had great Aprils an Mays, on average. Apparently, it's not how you finish, it's how you start.