How Do Ultimate Base Runs and Equivalent Base Running Runs Compare?

Share All sharing options for: How Do Ultimate Base Runs and Equivalent Base Running Runs Compare?

Today, Fangraphs added Mitchel Lichtman's Ultimate Base Runs (UBR) to their site. Baseball Prospectus also has a base running statistic that tracks base runners since 1950, called Equivalent Base Running Runs (EQBRR). Each of these statistics attempt to measure the impact a player has on the basepaths, in order to gain a better perspective of the player as a whole. The data for UBR go back to 2002, so let's look at each of these stats for players from 2002-2011.

*Colin Wyers brought to my attention that UBR excludes SB/CS, while EQBRR includes this data. Since this is the case, I have subtracted EQSBR from the EQBRR data.

There are 1,776 players with base running statistics on both Fangraphs and Baseball Prospectus. These are their stories. 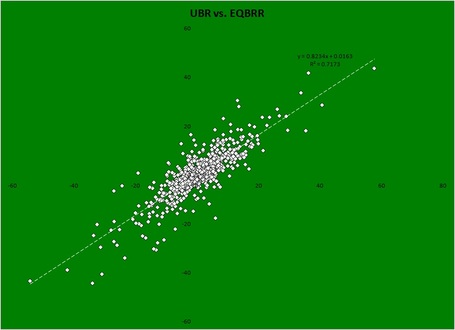 But most interesting -  where are the big differences?

Players that UBR rates much higher than EQBRR: 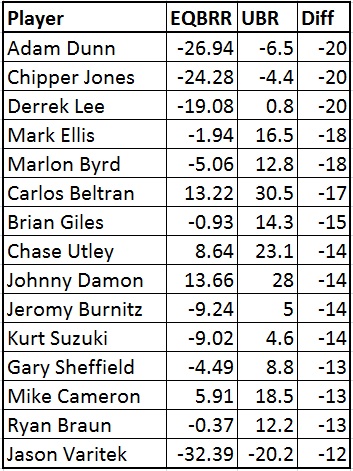 Players that UBR rates much lower than EQBRR: 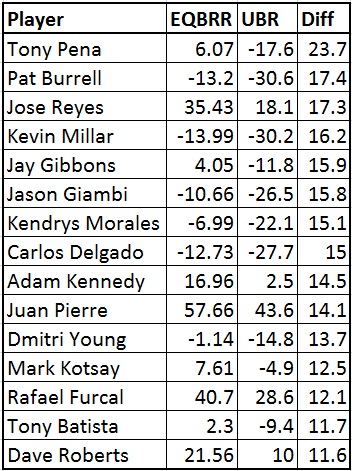 There are 125 players with the exact same run value (my apologies for not listing them all). All of these players have a run value between -2 and 2. 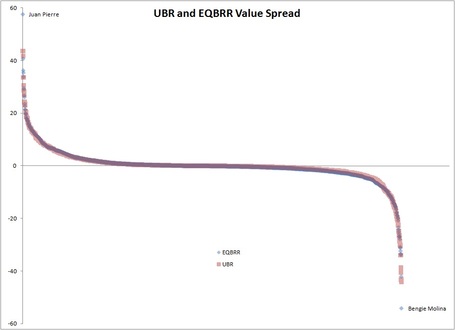 Both EQBRR and UBR have a similar spread. EQBRR has a few outliers that UBR does not have. It also looks like UBR flattens out more in the -2 to -5 range than EQBRR does.

There are quite a lot of similarities, which is comforting. EQBRR has a few more outliers and slightly lower values on average.