Living off the Long Ball: Team Runs and Home Runs, 2011

Share All sharing options for: Living off the Long Ball: Team Runs and Home Runs, 2011 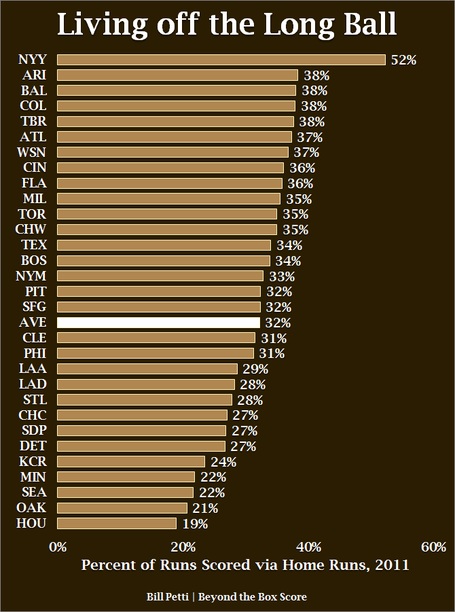 So far this year, roughly 32% of all team runs have scored as a result of a home run. I thought it might be interesting to see which teams are scoring largely based on the long ball. The graph above depicts the percent of all runs scored by each team this year via a home run.

So, the Yankees like to hit home runs. They've scored over half their runs via the long ball. They are currently ranked 3rd in all of baseball in terms of runs scored. The closet, high-scoring team that comes close to the Yankees in this regard are the Diamondbacks with 38%. Those same Diamondbacks have scored 25 fewer runs.

Scoring a high percentage of runs via home runs doesn't necessarily mean a team is high scoring, but it helps. Scoring has a .75 correlation with total number of team home runs, and the correlation between runs scored and percent via home runs is .47. Out of the ten highest scoring teams this year, only three find themselves below league average in terms of runs scored via home runs: the Cardinals (28%, 1st), Indians (31%, 4th), and Royals (24%, 9th). 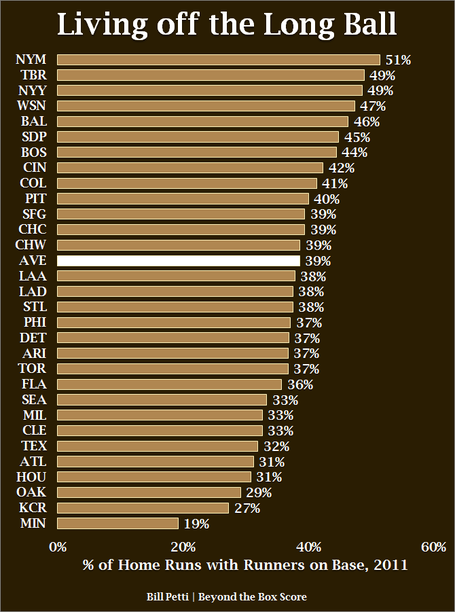 So they are heavily dependent on the long ball to score, but they've managed to score so many runs because they are getting guys on base (as a team, they are 5th in the majors in OBP). Given how much of an outlier the Yankees have been in terms of scoring via home runs you have to wonder what will happen to their offense if the OBP slides or their power swoons (their 15.9% HR/FB is really high, almost 6% higher than any other team this year).

The Mets, on the other hand, get about a league average percentage of their runs via home runs, but over half of those home runs come with at least one runner on.