Share All sharing options for: The Most Extreme Pitchers of 2011 (So Far)

No, this isn't about which pitchers drink the most Mountain Dew or which enjoy jet-sail-boarding through the Alaskan wilderness. (Though both of those would make for excellent posts in their own right.) This post discusses four pitchers who have managed to be very successful because of (or in spite of) some extreme rate stats. 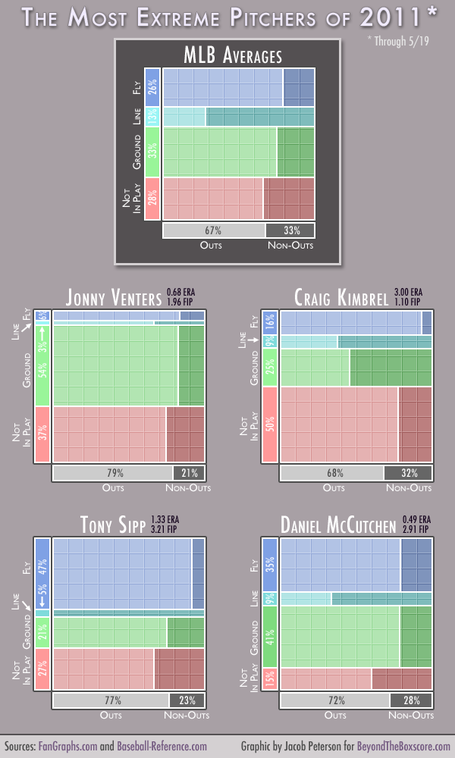 Each small square = 1% of the batters faced by that pitcher. A few more notes after the jump.

This fearsome foursome consists of

Despite these pitchers' contrasting styles, all have done very well this season. One common thread is the low rate of line drives, which no doubt has contributed to all of these pitchers' success. None have a line-drive rate above 10%.

Another commonality is a paucity of home runs. Sipp has allowed 1 homer (out of 36 fly balls), and none of the other three have given up any. This is likely at least partly due to luck and SSS issues, but there is also likely some skill involved.

Venters has had only 3 line drives and 6 fly balls hit off of him, out of 95 batters faced. That's just ridiculous.

Only half of the batters Kimbrel has faced (44/88) have put the ball in play. He's gotten very unlucky on ground balls, as fewer than half of them have been turned into outs; that's why his ERA is so much higher than his FIP.

Sipp has a 16/36 GB/FB ratio; by contrast, Venters' mark is 51/6. In addition, Sipp has a strong 19.4% infield fly rate. Since infield flies are basically automatic outs, that helps him limit the damage on all those fly balls.

McCutchen is striking out only 2.95 batters per 9 innings, but he's still managed to be successful, due at least in part to that 9% line-drive rate. Still, his ERA is unlikely to stay below 1.00 (or even below 2.00) with those peripherals.