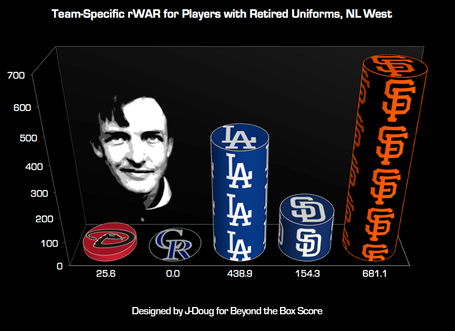 This look at the NL West rounds out our quantitative look at retired uniforms by division. The Dodgers and Giants rank among the best of the Senior Circuit in this category; nobody should be surprised by this. The Padres, Diamondbacks and Rockies are on a decidedly lower tier, although the Friars do pretty well as far as expansion-era teams go.

The performance numbers for San Francisco include Christy Mathewson: original Hall of Famer, third all-time in wins and first all-time in surnames. Mathewson, of course, didn't wear a number, but his uniform is honored with the other retired jerseys of New York and San Francisco Giants. 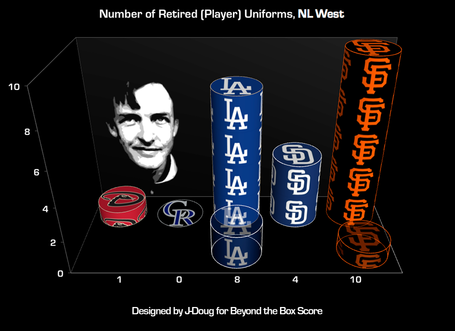 Not to be forgotten are Dave Winfield and Tony Gwynn (Padres), or Luis Gonzalez, the Diamondbacks' lone retired uniform owner. The Rockies have yet to retire a jersey.

Representing the non-player retired uniforms of the NL West are those of legendary managers John McGraw, Walter Alston (who was at the helm when the Dodgers finally conquered their Bronx Borough rivals in 1955) and the marvelous Tommy Lasorda.