Share All sharing options for: Visualizing AL Central Starters: FIP through May 18th 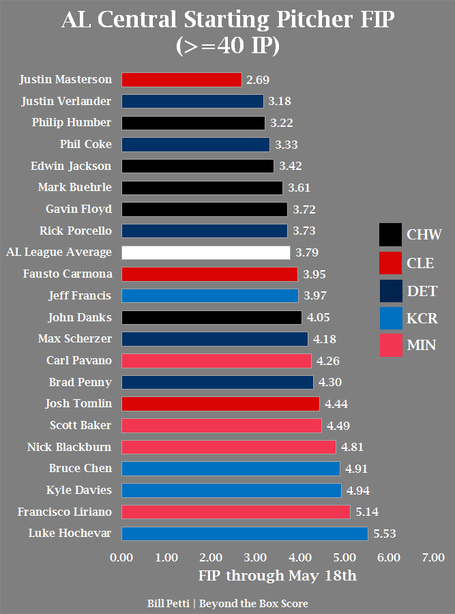 The graphic above depicts all AL Central starting pitchers with greater than 40 innings pitched through May 18th. So far, this is the most surprising divisional breakdown I've done. Why? Simple. The White Sox.

Currently they have four starters with FIPs better than league average, and four of the top seven in the division. How have they given up so many runs this year? Their bullpen also has a sub-4 FIP. As someone who doesn't follow the team closely, this is perplexing. With Jake Peavey seemingly set to pull a Bartolo Colon, that rotation could look even scarier.

The Tigers sport three starters above league average, and none of their starters have FIPs over 4.30.

The Indians have only one starter above league average, but he's sporting a sub-3 FIP. Justin Masterson continues to throw well this year. Fausto Carmona comes in just a hair over league average, while Josh Tomlin has only managed a 4.44 FIP.

How about those Royals and Twins?

Wow, what can you say about these two starting rotations? To put it simply, they are bad.

The Royals have managed to put together a decent offense this year, scoring 195 runs. The problem, and it's just getting worse with time, is that their pitching can't keep runs off the board. They've allowed 205 runs and don't have a dominant, reliable starter (although Jeff Francis is doing pretty good with a 3.97 FIP). Danny Duffy to the rescue?

The Twins are worse than the Royals, here. All four starters are below league average, with Carl Pavano and his 4.26 FIP leading the way. Liriano has looked much better of late, but it is going to take a lot for this team to have any chance of winning even when (if) the offense rebounds.