2009 15th overall pick Alex White made his major league debut for the Indians on Saturday, and he pitched a pretty good game - 100 pitches over six innings, allowing six hits, two runs, two walks (excluding two intentional passes), while striking out four Detroit hitters.  White, who is 22, also picked up 10 groundballs on his 18 pitches put into play.  As I typically like to do with pitchers making their major league debuts, I will first turn to a minor league scouting report.  Courtesy of Lincoln Hamilton from Project Prospect:

"Alex White has good arm strength, as he can run his fastball up as high as 95 mph. His fastball normally sat 88-92 mph and while the velocity isn't overwhelming, the movement on the pitch is. White had the best sinking fastball of anyone I saw in the 2009 draft, save Stephen Strasburg's two-seamer. One would expect White, who generates good sink on his fastball and lives down in the zone, to be a substantial groundball pitcher at higher levels ... White compliments his well-above-average fastball with a rather unique array of offspeed and breaking pitches. White's two primary breaking balls are a slider and splitter, both of which flash plus and should be at least above-average offerings. White's slider has massive break and will start inside to right-handers and finish well off the plate. Many college hitters chase pitches like that, but fewer professional hitters will. White's slider also breaks relatively early out of his hand, occasionally running together with his curve, which will make it easier for big leaguers to spot. I think White's splitter holds more promise than his slider, as it has good, late downward break. The splitter generally clocked in at 83-85 mph ... White also showcased a changeup, curveball and occasionally a four-seam fastball."

Saturday's start against the Tigers gave us an opportunity to examine White's repertoire through PITCHf/x. Charts and graphs after the jump.

While the Project Prospect report identified six different pitch types from White, I could only see four from his start.  His four-seam fastball, sinker, slider, and splitter formed four very distinct clusters in terms of pitch movement and velocity.  The first chart below shows the spin deflection (pitch movement), in inches, of White's offerings.  The second is spin direction, in degrees, plotted against velocity.  I've also included chart with aggregated pitch data.*


*The numbers here are straight from the PITCHf/x files from MLB Advanced Media.  Mike Fast kindly provided some ballpark offsets for me and showed that Progressive field is running ~0.9 mph slow, pfx_x is shifted positive by ~0.5 inches, and pfx_z is shifted negative by ~0.4 inches.  Nothing seriously off, but consider these adaptations when looking at the aggregated data. 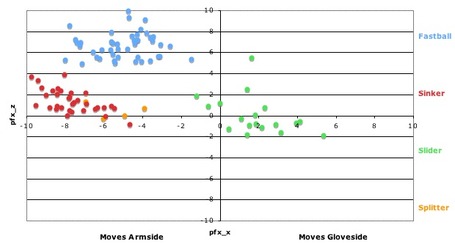 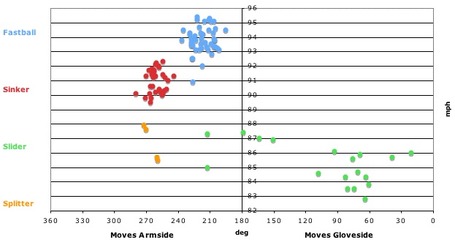 White's two fastballs are at two completely different speeds - while it may be intuitive that a pitcher takes a few miles per hour off of his four-seamer to generate extra movement for a sinking fastball, the typical pitcher's four-seam and two-seam (sinking) fastballs only have within one mph of speed difference.  A difference of almost 3 mph is extremely unusual; some pitchers who have similar differences between their four and two-seam fastballs are Bartolo Colon, Pedro Beato, and to a somewhat lesser extent, Justin Masterson.

As for what happened once the ball reached the plate, I've got some pitch results for you:

Despite his profile as a groundball specialist with a hard sinker, White threw more four-seamers Saturday than two-seamers.  Both fastballs seemed to be pretty effective at getting groundballs.  For the most part, White threw the slider as his "soft" pitch to righties and the splitter to lefties.  The one splitter he threw to a right-handed hitter hung up and got crushed for a homer (well, Miguel Cabrera does do that a lot).
We're obviously going to need more appearances to get a better feel for White's pitching style in the majors, but from what we have here, he definitely looks exciting.  Pitchers who have velocity, a sinking fastball, and a hard slider are always (and by always, I mean "always, according to me") fun.  With Carlos Carrasco battling an arm injury, I'd bet White stays around the Indians' rotation for a little while; I'd keep an eye on him.