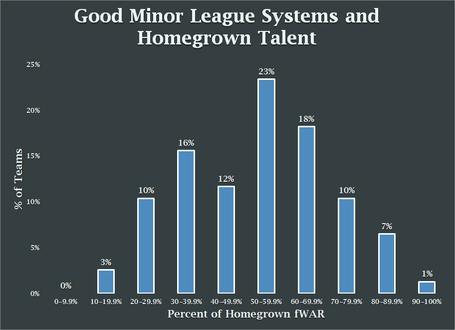 When an organization is chock full of good prospects, fans tend to expect a team full of homegrown players and a lot of Major League success. But there is a big obstacle in the path to that homegrown success. Most prospects fail. In order to have a team where even the majority of the production comes from homegrown players, a lot of prospects have to pan out. But there have been anecdotal examples of successful teams featuring almost exclusively homegrown talent. I wanted to go beyond the anecdotes and see what kind of major league teams actually came from very good minor league systems.

In Part 1, I looked at top five ranked minor league systems from 1995 to 2005 and then analyzed the pythagenpat record of that organization’s major league team for the five years after the ranking year. I found that 77 of those teams had a pythagenpat of at least 86 wins. This is the cutoff I’m using for a "successful" team.

For each of those teams, I recorded the total fWAR, fWAR from homegrown and outside players and the number of players with two or more fWAR from each group. I defined "homegrown" as a player who made his major league debut with the team and hadn’t played for another major league team between that debut and the season in question.

The table above shows the distribution of the percentage of homegrown players on these teams. What you see is close to a normal distribution with the mean in the 50’s. So that you can see all of the details of the distribution, here is the full data table.

And the additions from outside the organization were usually more than just a handful of minor contributors. On average, these teams had 4.4 players from outside the organization with two or more fWAR and these players averaged a total of 21.1 fWAR. Even the ten teams with the highest homegrown percentages averaged just under two players with at least two fWAR and, on average, those teams had a little over seven fWAR.

The Relevance of Market Size

One might think that the low percentage of homegrown talent on some of these teams was due to the fact that they chose to go with expensive free agents, because they had more money to spend and were too impatient to wait for their prospects to pan out. If this were true, one would expect for large market teams to have a significantly lower percentage of homegrown fWAR than their peers.

While some differences can be seen when comparing the three market size groups, their percentages of fWAR from homegrown and outside players are all near the average. It doesn’t appear that large market teams are choosing to go with outside talent over homegrown players. Both large, medium and small market teams all usually need to add significant talent from outside the organization in order to succeed.

Every team would like to be filled with homegrown talent. These players are less expensive (at least through their cost controlled years) and it gives the fans an opportunity to build a strong connection with their favorite team’s players. But this is more easily said than done. Even in this sample of successful teams following very good minor league systems, where you would expect the highest percentages of homegrown talent, the vast majority of teams had to add a good deal of production from outside the organization.

The sample sizes in this study are small, and this certainly doesn’t provide some formula you can use to determine how much fWAR a given team is going to need to add from outside sources. But it does show you what has happened over the last fifteen years and provides valuable empirical evidence on which a fan’s reasonable expectations can be based. It appears that a completely homegrown team is an unreasonable expectation. But can the vast majority of the team be homegrown? Yes, but it is rare.