Share All sharing options for: When Is a Team "Out of It?"

Last week, I looked at when we can tell whether or not a team is actually good or bad. I'd like to take that one step further by asking the question: "how far back can a team be and still have a shot at winning their division?" Again, all data were collected from coolstandings.com.

I looked at how many games ahead of the division a team was at the end of each month and plotted that versus end of season team wins. A negative games ahead number is equal to how many games behind the division leader the team is. For instance, the top two teams in a division are 20-10 and 19-11, respectively. The 20-10 team will be one game ahead and the 19-11 team will be negative one game ahead. I won't be focusing on the wild card teams here, since the amount of games back they are is more closely related to how good the first place team is. 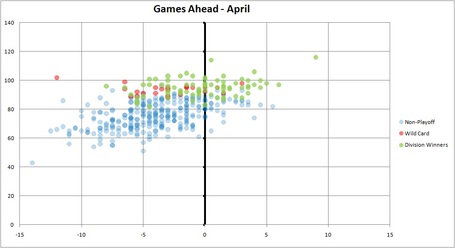 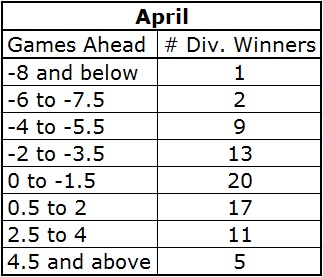 Again, the end of April doesn't mean much. If a team is over nine games back at the end of April, they're probably too bad to make the playoffs in the first place. How about those 2001 Mariners who absolutely destroyed their division? That red dot out in the middle of nowhere? That's the 2001 Oakland Athletics who finished the season with 102 wins. They were 12 games behind the Mariners at the end of April. 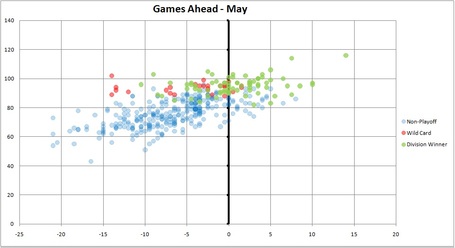 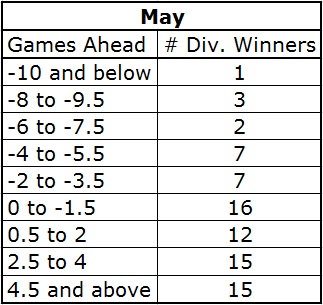 Again, May doesn't show much either. Good teams that are over 10 games back by the end of May are looking for the wild card spot. Most of the other teams that far back will be competing for next year. 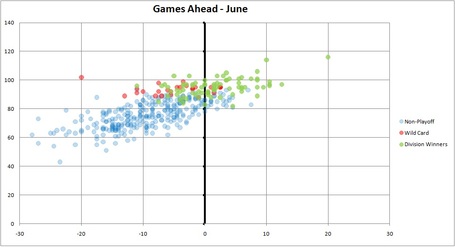 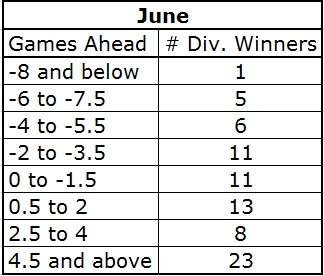 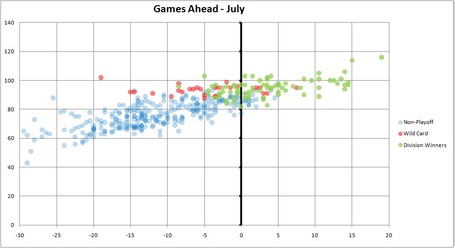 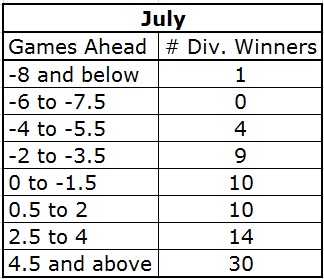 There is an even greater separation in July, which is consistent with the previous post. Again, the 2006 Twins are 8.5 games back, but most teams are only about 3-4 games back. Only a handful of the non-playoff teams are in the division lead at this point. A majority of the division leaders at the end of July will make the playoffs. 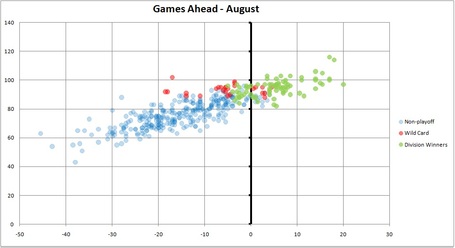 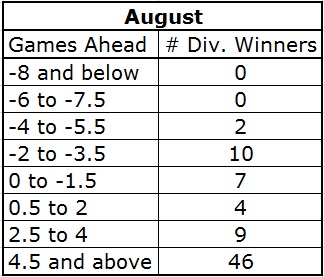 August continues this trend. Now, the 2006 Twins are only 5 games back and most teams are 2-3 games back. And yes, the 102-win Oakland Athletics are 17 games back in their division. 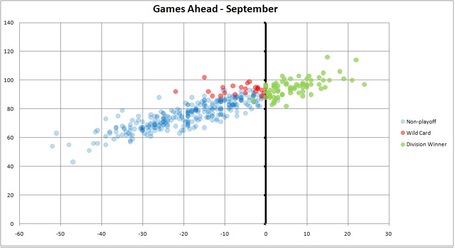 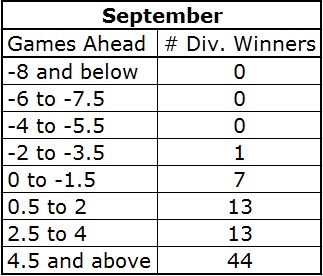 What conclusions can be drawn here? How about another chart? 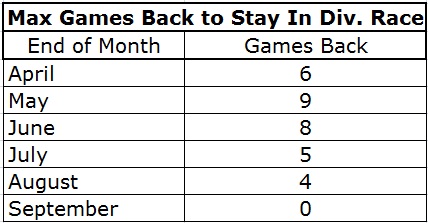 Of course, these are just guidelines. The wonderful thing about baseball is how unpredictable it is. Nine times out of 10, a team three games back with five to go doesn't make the playoffs. But there's always that one time that it does happen (2009 Twins). Teams will continue to defy the odds and completely ruin any chance of perfectly modeling anything baseball-related. But isn't that why we're fans?