When They Lost It: Near-Perfectos and the Inning They Were Broken Up

Share All sharing options for: When They Lost It: Near-Perfectos and the Inning They Were Broken Up 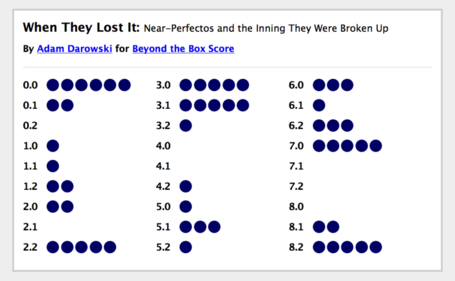 Anibal Sanchez's recent near no-hitter got me thinking. And that's a good thing, since time to think about baseball history has been tough to come by lately for me.

I'm always impressed when a pitcher can lose a no-hitter or perfect game very late in the contest and still hold it together to finish the game without further damage (particularly in the case of Armando Galarraga). So, I decided to use Baseball-Reference.com to find the closest games to perfect (just a single baserunner) to see when the bid was broken up.

In history, we've seen everything from 8.2 perfect innings before allowing a home run ( to allowing a leadoff single in the first and retiring the next 27. Those have to feel completely different. In one game, the pressure to remain perfect grows more intense with every out. In the other, that pressure never existed.

Since 1950, there have been 57 games where a pitcher went 9 innings and allowed just one baserunner (via a hit). We have play-by-play data for 55 of them (we don't have play-by-play for gems by Bob Friend and Ken Raffensberger). I plotted each game in the graphic above to get a sense of when this perfect game bids typically end. You can also click through for an interactive version that shows which game is represented by which circle.