Share All sharing options for: Visualizing AL Central Hitters: wOBA through May 12th 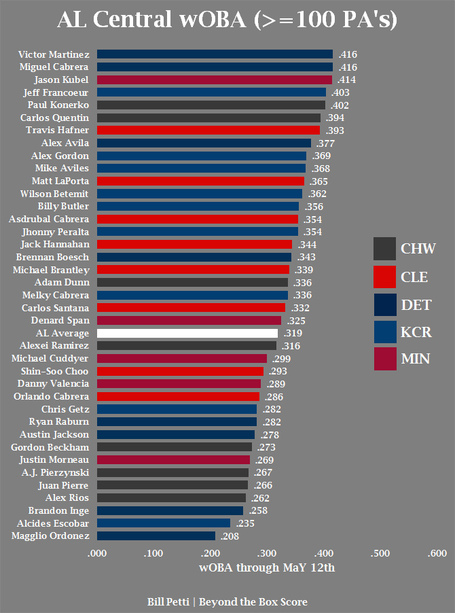 Geez, I wonder why the Royals and Indians are fourth and fifth respectively in the AL in scoring? Oh, that's right, they each have six regular hitters respectively with wOBA's over the AL league average. The Royals sport five players with a wOBA of .356 or above (with the biggest surprise being Jeff Francoeur and his .403 wOBA). The Indians Travis Hafner is enjoying a resurgence (,393 wOBA) and perennially underrated slugger Shin-Soo Choo hasn't even gotten going yet (.293 wOBA).

As impressive as that is, the Tigers have five hitters above league average, but lead the AL in runs scored (181) and have two players with .416 wOBA's (Victor Martinez and Miguel Cabrera).

The Twins and White Sox currently dwell in the AL basement, sporting the two worst winning percentages. The White Sox have scored 150 runs, but even that is somewhat surprising. Paul Konerko and Carlos Quentin are scorching hot so far (.402 and .394), but things get really thin after that. Free-agent Adam Dunn has only managed a .336 wOBA and four of the Sox starters are under .273 (Beckham, Pierzynski, Pierre, Rios).

That looks solid compared to the Twins.

Minnesota has only managed to get five of their starters on the field for over 100 plate appearances and only two of those starters have wOBA's above league average (Justin Kubel and Denard Span, whose only sporting a .325 wOBA).

Furthermore, pitching hasn't been a help to either club. We'll look at that in the next post.