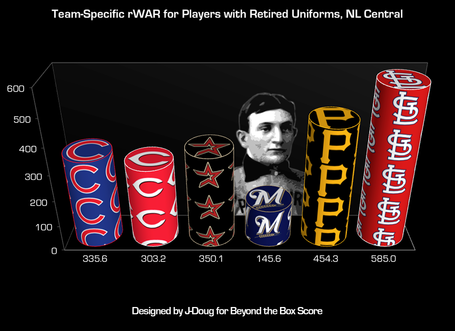 The National League Central is stacked when it comes to retired numbers, and it's not just because there are six teams. NL Central teams have retired a total of 44 player jerseys accounting for a staggering team-specific rWAR of 2,173.8. Even when pro-rating these figures to a five team division, the Middle American Senior Circuit outpaces all rivals.
It's no surprise that the Cardinals lead this pack with 585 combined team-specific wins above replacement, averaging 58.5 per player. However, our younger readers may be shocked to discover that the Pittsburgh Pirates were once a successful franchise. It's true! The Bucs are second with 454.3 team-specific rWAR—an average of 56.8 per retired uniform.
And there's no forgetting the Cubs and Reds. The Cubs are #3 in the division in total rWAR for retired unis and #4 in mean rWAR; the Reds are #5 and #4 in the same columns.
Finally, the strength of the Astros and Brewers in this area is testament to how illustrious the NL Central is. Both teams rank high among total rWAR for retired uniforms even though they are both expansion teams. 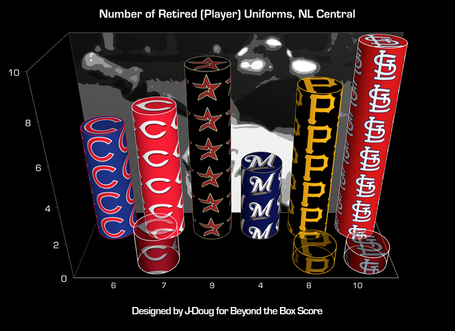