Share All sharing options for: Visualizing AL East Starters: FIP through May 10th 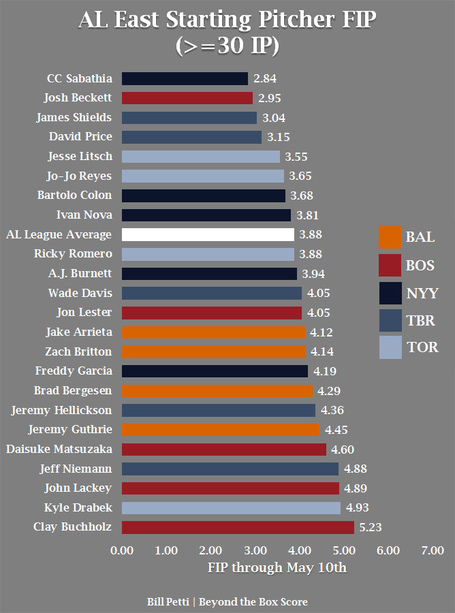 Continuing my early-look series by division of hitters and pitchers I present for you AL East starters ranked by FIP. The graphic includes those starters with >=30 innings pitched as of May 10th.

The visual really puts into perspective what many have been surprised by--the effectiveness of the Yankee's starting pitching. Three of the Yankee's starters have FIPs above the AL average, and that includes Bartolo Colon. The amazing thing about Colon is that his xFIP is even lower than his actual (2.79--biggest difference in the division) due largely to his 7.2 K9-BB/9. As a result, the Yankees have the 4th best runs against in the AL. When you combine that with the 2nd most runs scored you get a comfortable .588 winning percentage.

Additionally, the Red Sox uneven start is reflected in the fact that while they've hit well (much better as of late), their starting pitching has absolutely killed them. Four of their five starters have FIPs below league average, and that includes the worst and third worst FIPs for the AL East. The good news is that Jon Lester and Clay Bucholtz should get better as the season progresses, given that both have FIPs substantially larger than their xFIPs (.76 and .44 respectively). But that still leaves them with the dual problem of John Lackey and Daisuke Matsuzaka.

The Rays boast two pitchers above AL average--James Shields and David Price.  The Rays' revival is due in no small part to their pitching (fewest runs allowed in the AL). Wade Davis has also put up a solid 4.03 and young Jeremy Hellickson has a 4.36. Davis' 2.9% HR/FB is largely responsible for his FIP, given he's only averaging 4.1 K/9 and 3.9 BB/9. If Hellickson can cut down on his walks (4.2/9) he should be in good shape going forward.

Toronto's starting pitching has been pretty good, despite the fact that they've allowed 168 runs as a team. Two of Toronto's starters have above average FIPs (Reyes and Litsch) and Ricky Romero is just at league average (3.88). Kyle Drabek is in much the same boat as Hellickson--he's walking as much as he's striking out. But when you are striking out almost seven batters per nine, a modest decline in walks will pay huge dividends.

And finally, the Orioles. Not a lot to talk about here. All four of their starters with >=30 innings are below league average. As a team, they've given up the fifth most runs in the AL, and unfortunately they aren't hitting that well--hence the -30 run differential.