Share All sharing options for: Visualizing AL East Hitters: wOBA through May 10th 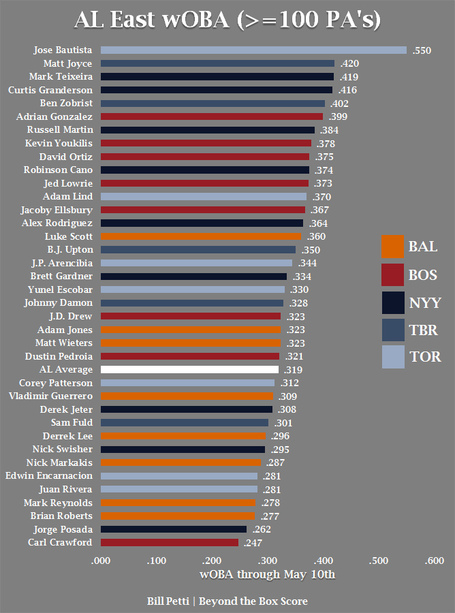 The AL East has long been known as a land lush with quality hitting. This year is shaping up to be no different. Through last night, four of the five AL East teams managed to score over 150 runs to start the 2011 season--almost half of the top scoring teams in the AL reside in the East.

Another way to look at the East's hitting prowess is to compare each player's wOBA against the AL average (currently sitting at .319). The graph above looks at AL East hitters with >=100 plate appearances as of last night. Players' bars are color coded to match their respective teams. AL average is coded white.

Let's get the obligatory "wow, Jose Bautista is absolutely killing the ball" moment out of the way up front.

Additionally, the Yankees have two players with wOBA's over .400. The only other team in the East?

Matt Joyce and Ben Zobrist have gotten off to great starts. What's most amazing is that Joyce has put up a .420 wOBA (2nd best in the AL East and 7th best in all of baseball) while hitting only three home runs.

Moreover, the Rays only have five players on this list (four above league average), but that's because Evan Longoria has only scrapped together 36 plate appearances so far this year (.444 wOBA) and Casey Kotchman (.393 wOBA) and John Jaso (.318 wOBA) have 75 and 74 respectively. Despite getting off to a horrendous start and losing Longoria, the Rays have managed to move within one game of the Yankees and have the third-highest winning percentage in the AL.

The Orioles have cooled off as many predicted, and when you look at their offense it's not surprising. They do boast three players above league average, but only one is significantly above (Luke Scott). Additionally, their three big off-season pickups are all struggling to make an impact (Vladimir Guerrero, Derek Lee, and Mark Reynolds).

And, finally, Toronto's offense has essentially been a two-man game, which works great in basketball but not so much in baseball. Outside of Bautista and Adam Lind, the Blue Jays aren't getting much out of their position players. They'e scored the same number of runs as the Rays (147), but their pitching has not been as good as advertised (159 runs allowed).