Shortest and Longest Time Between No-hitters (and other interesting facts)

Share All sharing options for: Shortest and Longest Time Between No-hitters (and other interesting facts) 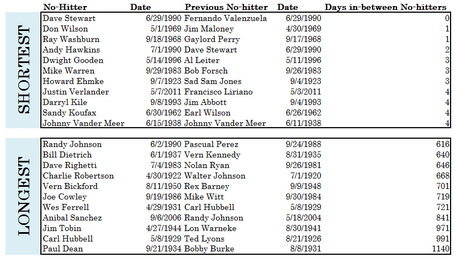 This past Saturday, Justin Verlander tossed his second career no-hitter. This was the second no-hitter thrown this season, and the second thrown during the week. Two no-hitters thrown within just four days of each other.

Was this the shortest time between no-hitters? Actually, no.

Two no-hitters were thrown on the same day: Dave Stewart and Fernando Valenzuela achieved the feat on 6/29/1990. 1990 was a heck of a year for no-hitters. Eight no-no's were thrown that year, the most in any single year. Randy Johnson threw the first on 6/2/1990, which was 616 days after Pascual Perez no-hit the Phillies on September 24, 1988 (11th longest drought between no-hit games).

The second most prolific year for no-hitters? 1969, which featured six no-no's. That season came on the heals of 1968's five no-hitters.

All told, eleven no-hitters were thrown within four days of each other. Johnnie Vander Meer threw both his career no-hitters in consecutive starts--the only pitcher even to manage that extrodinary feat. However, there have been some other amazing feats.

Of course, there have been large droughts in-between no-hitters.

Overall, there have been eleven no-hitters that occurred more than 600 days after the previous one. The longest? 1140 days between Bobby Burke's no-no and Paul Dean's in 1934--fans had to wait over three years to see the next no-hit effort.

Here's a list of all no-hitters and the length of time between them (note: list does not include combination no-hitters):