Big Results from a Small Stature: How does Tim Collins succeed and should we worry about his release points?

Share All sharing options for: Big Results from a Small Stature: How does Tim Collins succeed and should we worry about his release points?

Tim Collins is a pretty fascinating pitcher.  Listed at what's been described by nearly every news outlet as an extremely optimistic 5'-7" (and then described in those same news outlets as being probably closer to 5'-5", seriously people, why can't we just go by what he guy tells us!), he manages to throw a fastball in the low to mid 90s (and supposedly he was hitting 94-97 at some point in the minors).  And his performance so far has been pretty great too: 6Ks, 1 BB in 4.1IP, while giving up only 4 hits.

So how has he gotten these great results, admittedly in a tiny sample size?  Well, let's take a look at his stuff with pitchf/x.  One BIG caution here: Not only is this a small sample size, but two at bats (7 out of 66 pitches) were not tracked by pitchf/x, and one of those at bats resulted in a strike out (which is of obvious importance to us).

The chart above, in case the caption isn't visible for you, is Figure 1:  A Chart showing the paths traveled on average by each of Tim Collins' three pitches: the fastball (in red), the curveball (in purple), and the change-up (in yellow).  The black rectangle represents an approximation of the strike zone.  The release points of each pitch type are represented by the smallest dot on each path and the average location of the pitch as it crosses the plate is represented by the largest dot.

Tim Collins throws three pitches essentially: A (presumably four-seam) fastball, a change-up, and a curveball.  The average velocity and movement of those pitches can be found in Table 1 below.

Table 1:  The movement/spin-deflection and velocity of each of Tim Collins' three pitches.

Collins' fastball and change-up both seem to be remarkably "straight," in that neither pitch has much horizontal movement (a typical four-seam fastball will move at least 6-7 inches in on same-handed batters).  You can see this in the pitch paths shown on Figure 1 above.

However, the word "straight" is extremely misleading here.  Because of the fact that the two pitches do not break very much horizontally, the pitch approaches the batter not head-on, like the typical fastball, but on an angle - like a cutter, though without much cut at all.  Thus to a batter, these pitches do not appear straight, but appear to be going sideways across the plate, which makes them harder to hit.  You can see this in how the pitches in Figure 1 are still moving diagonally as they approach the plate.  A typical four-seam fastball bends so that it approaches the plate head-on, even though the pitch's path has actually curved a greater amount.

Both the fastball and change-up have a large amount of "rise" - that is, the pitches' spin cause them to sink over 11 inches less (you can see the actual amounts in Table 1) than you would expect these pitches to due to gravity as they cross the plate.  Thus it would be kind of surprising if either of these two pitches wound up as a ground ball pitch, as the pitches are more likely to wind up in the top parts of the strike zone.  The good news is that the other side of this is that the top parts of the strike zone are the parts where a fastball is more likely to get swing-and-misses, resulting in more strikeouts.

Oh, and the fastball has a pretty solid velocity for a left-handed pitcher's fastball: averaging over 92 MPH per pitch thrown.  It's not an amazing velocity - I've seen some reports have Collins at 94-97 MPH, which would fit that criteria - but it's pretty good, and only makes the pitch more deadly.  The change-up's velocity of 81.6 MPH is not particularly special, but due to Collins' fastball, it could be good enough to be a plus pitch in the major league.

Then there's the curveball.  Tim Collins' curveball has a ton of movement in both directions: the pitch drops almost 9 inches more than we'd expect the pitch to because of gravity - a very good drop, comparable to that of Adam Wainwright's excellent curveball.

The pitch also has a really large amount of horizontal movement: it moves 6 and a quarter inches in on right-handed batters (and away from left-handed batters).  Thus the pitch is clearly not a 12 to 6 curveball, or even really as much of an 11 to 5 curve, but almost a 10 to 4 curve (which still has the drop of 12 to 6 curveball, mind you).  For reference, this would make the pitch similar-ish to Adam Wainwright's curveball, though Wainwright would seem to get more horizontal movement on his curve than Collins.

The one area where the curve isn't intriguing is in its velocity: the pitch has basically average velocity (or below average maybe) for a curveball.  This should result in a lower GB rate (curveballs near 80MPH have stellar GB rates) and perhaps a lower swinging strike rate on this pitch.  On the other hand, a guy with a curve with a similar velocity, Adam Wainwright (getting the picture yet?), still manages a stellar swinging strike rate and a reasonable, if not stellar, GB rate on the pitch just above 50% on this pitch.

So anyhow, as you can tell by now, both the fastball and curveball of Tim Collins would appear to have really good movement and/or velocity, and could be really good pitches.  However, there's an elephant in the room in regards to Tim Collin's pitches, one that can't be ignored when talking about his potential:  the fact that each of his three pitches has a distinct release point:

One thing that should have been immediately obvious from Figure 1 is the fact that all three of Tim Collins' pitches originate from a different point, especially the curveball.  You can see this even more clearly from a plot showing the release points of each of Collins' tracked pitches this year, which is in Figure 2 below*.

*The release point data normally given by pitchf/x is flawed since it's where the pitches are located 50 feet from home plate, which is not where pitches are released (that's closer to 55 feet).  The data in Figure 2 has been corrected to show the proper release point locations as extrapolated from the data: 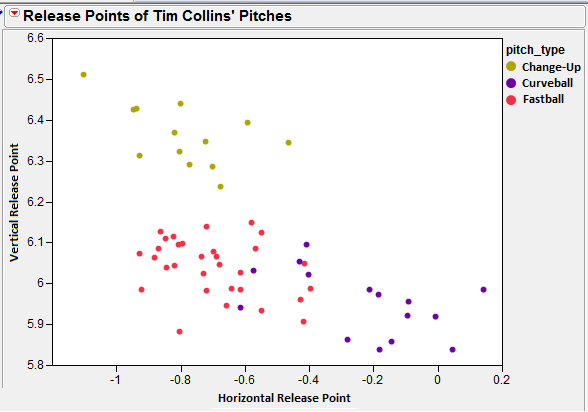 Figure 2:  The Release point of each of Collins' pitches this year.  The numbers on each axis represent, in FEET, the release point's distance either above ground (for vertical release point) or from a position directly in front of the center of home plate (with negative numbers being the third-base side of the rubber).  The graph is shown from the point of view of a catcher.

However, it's not just the curve that has an odd release point: Collins' CHANGE-UP ALSO has a distinct release point, which is over 4 inches away from the average fastball release point, a not-tiny distance.  Unlike the curveball, the change-up is thrown from a clearly HIGHER release point than the fastball, though the release point is pretty similar from a horizontal perspective.  In other words, this simply seems like Collins is reaching his arm up higher to throw the change-up, though keeping the same arm slot.  Thus one would expect this pitch to be less recognizable by its release point than the curveball, which has a clearly different arm slot.  However, one could potentially see this pitch is coming based on the release of Collins.

Now the question becomes:  how bad is it that Collins has these release points?  Is he "tipping pitches?"  The answer is hard to tell, but I would speculate that this is not really much of an issue.  A study I did on this site last summer seemingly revealed no difference in the performance of curveballs as their release points became more distinct. Still, I'm not particularly confident in that result, particularly as that study didn't consider the question where a pitch has a clear different arm angle at its release.

That said, I still don't think it's a problem that will hold Collins back in his role as a reliever.  See, even if scouting reports would pick up on this release point issue, it's not likely to be something batters pay much mind to as Collins is not someone they're guaranteed to face.  This of course could change if Collins eventually replaced Soria as a closer, but that's a long way down the road.  And since batters are not likely to see very many pitches from Collins, they won't really pick up on it quickly in game as they would when facing a starter.

In addition, I'm really of the mindset that batters are not quite able to pick up effectively release point differences such that affect their swinging habits.  Remember, we're talking a decision that batters need to make in a quarter of a second here of whether to swing or not.  I suspect batters are not really going to be actively looking for the release point and if they're not and they do notice it, they won't really be able to process noticing it fast enough to affect their decision-making on whether to swing.  Moreover, it's not like batters can clearly compare the release points of the pitches as they're thrown...they don't get to see it on a chart.  Thus I don't think this will be a problem.

When people talk about tipping pitches, its usually in how the pitcher acts prior to the windup, or perhaps in a leg kick maybe, not in where exactly they release the ball.  Remember, it's hard to believe that the scouts viewing Collins in the minors wouldn't see the release point issue if it was significant, and Collins has been wanted by three teams now.  And he's succeeded quite well in the minors despite this problem, though one could argue that minor league batters are not quite as apt at picking up such tipping as major league batters.

By the way, there's one other interesting thing about you might have missed in all this discussion: Tim Collins' release points are ALL really oddly located for a left-handed pitcher.  In other words, he releases the ball very very far on the third base side of the mound (for a lefty).  In fact, if he maintained these release points, he would have a more extreme release point in this regard than any pitcher last year, and even the curveball would be dead-even with the most extreme pitcher last year, Hideki Okajima.  It seems that part of this is the fact that Collins stands literally on the EDGE of the third base side of the rubber, but even then this release point is quite odd.

Tim Collins has three pitches, all of which - though particularly the fastball and curveball - have the potential to be really good.  The release point does bear some watching.  But I don't think it's particularly worrisome and his results should be really interesting to look at once we get a larger sample size.