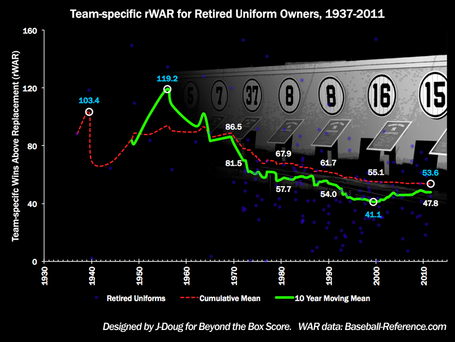 Are MLB franchises exercising less discretion when retiring player uniforms? A look back at the history of retired uniforms—and the contributions of those who filled them—suggests that they are.

By combining the data used in last week's post on retired uniforms with Rally's Wins Above Replacement (rWAR) values, I produced the chart above. Prior to 1970, it was rare that a team would retire a uniform that belonged to a player who contributed less than 80 rWAR to that particular team. By 1990, teams were regularly honoring players who produced less than 50 rWAR.

In 1999, the 10-year moving average for a player's contribution in a retired jersey bottomed out at 41.1 rWAR. The cumulative mean contribution currently sits at an all time low of 53.9. In 2000, the Devil Rays retired the uniform of Wade Boggs, who produced a whopping 0.4 rWAR while wearing a Tampa Bay uniform.

While it's important to recognize that on-field value is not the only variable teams consider when retiring a player's number, it's undeniable that teams are lowering their standards when they decide whom to honor.

More charts and analysis after the jump. 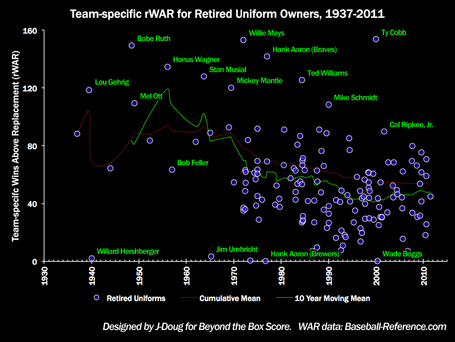 This second chart uses the same data as the first, but de-emphasizes the long-run trends in favor of individual retirements. Note above the separate retirements of Hank Aaron's jersey as a Brave and as a Brewer. Note also the retirements of Willard Hershberger and Jim Umbricht, two players whose careers (and lives) ended in tragedy.

Finally, vigilant reader Daniel Watkins alerted me to the fact that the Washington Nationals have recently flip-flopped on their decision to omit the four retired Expos' uniforms from their history. I have updated my original chart accordingly. See the new version below. 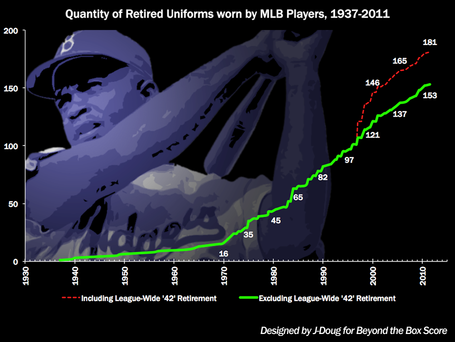 Methodological Notes: As I implied, I only counted contributions by players for the team(s) that retired their uniform. Therefore, players like Nolan Ryan are listed multiple times for the various teams that have honored them in this way. The contributions of players such as Babe Ruth and Wade Boggs only include the Yankees and Rays, respectively. I do not count the retirement of Jackie Robinson's #42 (beyond, of course, the Dodgers) in the rWAR values and averages, as he did not play for those other teams. For managers whose teams have retired their uniform, I counted them only if they also played for that team, e.g. Billy Martin.

Peruse below an inclusive table of players whose uniforms have been retired and their team-specific rWAR contributions.