Share All sharing options for: Fan Confidence vs. Current Standings

One really neat tool on the SB Nation platform is the "fan confidence ranking" available on the upper left of every team blog. Like all good rankings, 100% confidence means this team can and should win it all, and could probably beat other teams in the same city at their own sport, while 0% confidence means this team should be demoted out of the league, contracted, removed from existence. Somewhere in between is where most fans find themselves, and if you look around most teams hover in the 70s.*

It's a great way to express your current feelings about your favorite teams, and it functions as a measure of collective angst (or hubris). Speaking of which, two teams which typically have "pretty confident" fans are the Red Sox and the Phillies, and since those teams couldn't be moving faster in opposite directions, let's take a quick look at what their collective fanbases are currently thinking: 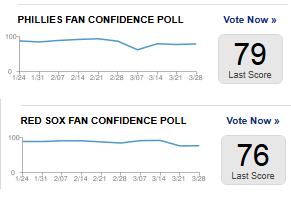 Looks like neither fan base is overreacting, other than what looks like Opening Day jitters in Philly and a weekend uh-oh in Boston. I would expect them to separate further if the trend continues, but I don't expect the trend to continue.

*I wonder if being in the 70s is like earning a C in school, in that it's a teacher/professor's acknowledment that, hey, at least you showed up, right? Or is this an opportunity for a social experiment -- perhaps the only people that vote are fanatical enough to think their team is better than they are and vote accordingly, or perhaps most fans give their team the benefit of the doubt? "At least they're not the Astros."