To Pull or Not to Pull: Slugging Splits for 2010

Share All sharing options for: To Pull or Not to Pull: Slugging Splits for 2010 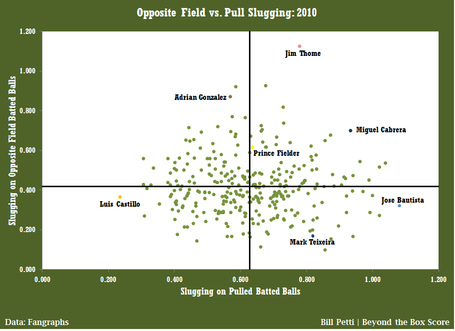 I decided to play around with FanGraph’s splits data the other day. (I definitely haven’t done this as much as I should.) The first set of splits I pulled was by batted ball location. FanGraph’s lets you look at hitters’ splits for balls pulled, hit up the middle, or hit the other way. I thought it would be interesting to see when hitters were most dangerous—when they pulled the ball or went with the pitch.

The average SLG for pulled balls was .628. The average for balls hit the other way was an expectedly lower .418. This split seems intuitive to me, as most players are better at driving the ball to their pull field.

There are some exceptions, however. Out of the 305 hitters sampled, 52 had higher SLG when going the other way than when pulling the ball (17%). Many of the hitters with the most drastic opposite-pull splits included some of the most feared hitters in the league: four of the top six included Jim Thome, Ryan Howard, Adrian Gonzalez, and Joey Votto. Adrian Gonzalez slugged .570 when pulling the ball in 2010, but slugged an eye-popping .820 when going the other way. Let’s pause a moment to consider what happens when Gonzalez plays his home games in Fenway this year versus PETCO.

In general, the higher a hitter’s SLG, the greater their pull SLG versus their oppo SLG, but not by much. The correlation between a hitter’s overall SLG and their SLG difference (pull SLG – oppo SLG) is only .23. In fact, if you isolate those hitters with an ISO of >=.180, the correlation is only -.084—essentially, no relationship at all. These pure sluggers have a higher standard deviation in terms of their SLG difference (.25) compared to the rest of the sample (.19).

Here are some interesting splits and takeaways to ponder:

Mark Teixeira: He’s a switch hitter that thrives on pulling the ball. Tex’s pull SLG was .819 last year. His oppo SLG? A measly .169. That was good for the 8th largest difference for pull-heavy sluggers.

Jose Bautista: The masher’s breakout year was largely, though not entirely, driven by his decimation of his pull field—1.081 versus .321. Bautista came in second in the difference in the pull-heavy sluggers field.

The hitter with the most drastic split?

Curtis Granderson: Granderson sported a .468 SLG in 2010 that was entirely driven by pulling the ball. Granderson slugged .940 to his pull field and only .170 to the opposite field. One wonders why a pitcher would ever work the inside half of the plate against him.

Jim Thome: Thome came in with the highest oppo SLG (1.130) and the most drastic split for oppo-heavy sluggers (difference of -.346). But he still slugged .780 to his pull field. Bottom line: you just couldn’t win with Thome last year.

Lance Berkman: Berkman did not have a particularly good year (.781 OPS), but when he manged to take the ball the other way he posted a SLG of .716. When he pulled the ball, however, he could only muster a .444 SLG, well below the average of .628.

Jason Heyward: Atlanta’s super rookie slugged a respectable .456 in his first year, and managed to do equal damage to his pull and opposite fields (.585 pull/.577 oppo).

Shin-Soo Choo: Arguably the most underrated offensive player in the league, Choo is a wonderfuly balanced slugger (.667/.642).

In terms of hitters with isolated power of >=.180, Fielder and Choo were by far the most balanced.

I do wonder whether there are stronger correlations based on types of hitters (i.e. righties, lefties, switch hitters). My gut tells me that switch hitters should have more drastic splits that favor their pull field, but I didn't have the data handy to run the numbers.

Here's a list of all hitters in the sample and their splits.