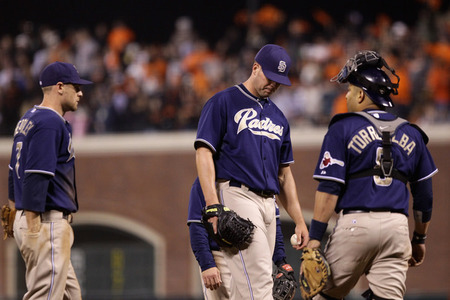 According to Major League Baseball commissioner Bud Selig, another wild card spot in each league will be added to MLB's playoff system. However, Michael Weiner - head of the Player's Association - says talks are still in negotiation, though he doesn't seem opposed to the idea. I'm sure there is a lot of politicking taking place, something I don't much care for.

So instead, I ask the question: what is the difference in adding a second playoff team? I decided to take a look at each season since the wildcard was introduced in 1995 and find out for myself. I took the record for each playoff team since 1996 and this is what I found:

More after the jump:

Since it doesn't appear that adding a second wildcard team would give an undeserving team a playoff spot, what should the playoff schedule look like? The only fair option seems to involve both wild card teams playing each other. This would not "punish" any of the division winners, even though at least one of the division leaders will most likely have a worse record than the first wild card team.

The first idea is to have a play-in game, where the two wildcard teams basically play each other for the right to make the playoffs. The wildcard team with the best record would host the game. This would be an easier burden on scheduling, but it doesn't seem like a good idea. Winning the right to play in the playoffs and then losing that right after one game doesn't seem very fair (in baseball, at least).

So the other idea would be to have a shortened wildcard series. But how long would the round be? Probably three games. A five game wildcard series would force all of the other teams to be idle for far too long and would definitely force a major rescheduling of the entire season.

Here are the three ideas I can come up with for a three game playoff series:

(1-1-1) - The series alternates between locations. While probably the most fair option, this would add two travel days to an already packed schedule. I don't see this as a viable solution.

(1-2) - I like this option the best. The second wild card team gets to start the series at home, but the first wild card gets to finish the series with the advantage.

It is also possible that the team with the best record gets to choose between the 2-1 and the 1-2 options.

Scheduling the wildcard round

But where would a wildcard round fit in the schedule? In 2011, the regular season will end on September 28th. The playoffs begin on September 30th or October 1st, depending on the presence of a 163rd game. If a three game wildcard series is added that begins on October 1st, the divisional round would not begin until October 6th. This would put the playoffs on a similar time schedule as the 2009 playoffs. That year, a seventh world series game would have been played on November 5th. Playoff games in November are a bad idea which will lead to regular inclement weather problems. The season can't start much earlier though, because of cold weather in early spring. MLB could possibly decrease the number of games played per season, but that's a highly improbable scenario. So, if the season can't start earlier and can't end later, but more games need to be played, what is the solution? There have to be more games played per calendar day. Since a three game wild card adds about five days to the schedule, this is my goal: Create a 162 game MLB schedule that begins March 31 and ends September 23rd.

There are three options that I can find for decreasing games per day:

-Allow fewer rest days for teams during the season

-Add double headers to the schedule

Of these three, the most likely is adding double headers. Neither the players nor the owners like double headers, but I believe this is the best option available to both parties. Rest days are necessary for players over the long season and I don't see the player's association agreeing to a decrease in this amount. Also, the All-star break is already only three days long, so there really isn't any time to gain there. So they're left with double headers.

Owners don't like double headers because they make less money on them. Day games during the week have a much lower attendance than night games. However, with another playoff spot up for grabs, this increases possible future revenue. The players also have an increased probability of making the playoffs and winning awards and bonuses, along with the World Series. I could see the owners and players both appreciating this enough to agree to more double headers.

With this proposal, the season would begin on March 31st. Teams would play 162 games, with a scheduled double header each month on Saturday. The season would end on September 23rd and the playoffs would begin on September 25th or 26th. Assuming the latter, the wildcard round would begin on the 26th and be completed on the 29th. The divisional round would begin on October 1st and the playoffs would be back on the same schedule as this year. The playoff teams not in the wildcard round would be idle for eight days. This is a legitimate criticism of the two wildcard system, but I don't see how this is avoidable, as the only dead time in this proposal involves necessary travel days. (Obviously, it is easily avoidable by not adding the second wildcard team. That, however, appears to be an irrelevant argument based on the desire for both sides of the issue to make this happen.)

So what will it be? Well, like everything else in business, it's all about the money. The most profitable and realistic option will be the one that is chosen, but it also has to be approved by the player's association. I think we will see a three game wildcard round beginning immediately after the regular season, which will fit into the current schedule by increasing the number of double headers during the year. However, I would not be surprised to see a one-game playoff happen, because of the potential money-grab in the drama of a winner-take-all affair. In the end, baseball will do what it wants and all we can do is sit back and enjoy the game in all its bright and vivid glory.