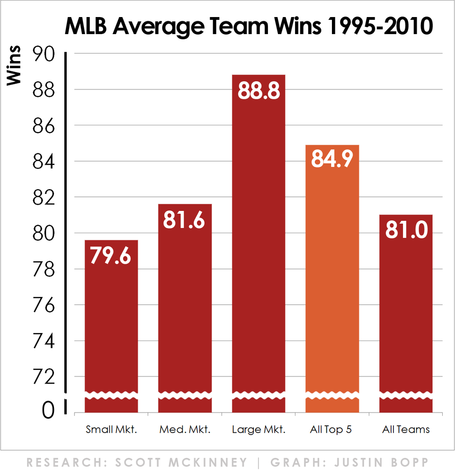 A minor league system is the perpetual source of hope for all Major League Baseball fans.  No matter how badly your favorite team is performing, a good farm system means that there’s a chance that a cellar dweller can become a perennial contender.  But of course even top prospects usually fail.  Sometimes even great minor league systems can fizzle and provide little help to the parent club.  And then of course the major league team’s front office and manager has to develop these prospects, promote the right ones and likely add outside talent as well.

A lot can go wrong, and the organization has to do a lot of things right.  In this study, I attempt to determine if good minor league systems really give rise to more winning at the major league level and if they do, to what degree.

To determine which were the best minor league systems, I used the organizations ranked in the top five of Baseball America’s annual Organizational Talent Rankings from 1995 to 2005.  I then looked at how those organizations’ major league team performed for the five years after the ranking year.  Instead of looking at the teams’ actual win-loss record, I used their pythagenpat record, a more accurate measure of team performance.  As the measure of superior success, I went with a pythagenpat of at least 87, as a Nate Silver’s study in Baseball Between the Numbers shows that a team with that many wins has approximately a 22% chance of making the playoffs. For market size classifications, I used Silver’s multivariate market size analysis, making the top 10 "large market," the middle 10 "medium market" and the bottom 10 "small market."

As you can see in the above graph, the data shows that organizations with a good minor league system tend to have more success in the five years after a good ranking than the average team by about four wins.

As you would expect, with more wins comes more playoff caliber teams.  From 1996 to 2010 33.0% of all MLB teams achieved a pythagenpat win total of at least 87, thus giving them a decent chance of  making the playoffs.  For teams with top five minor league systems, the rate of superior success is 52.4%.

The Importance of Market Size 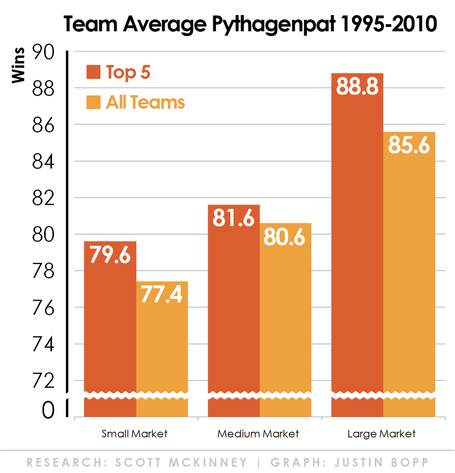 Unsurprisingly, there is a large disparity between the success of small, medium and large market teams.  But for each group, those with good minor league systems perform better than their peers.

A good minor league system helps an organization’s major league team significantly.  But the market size data shows that there are other important variables in play.  Perhaps evenue and ability or willingness to spend more at the major league level is an important factor.  If so that would imply that teams need more than just inexpensive, homegrown talent in order to succeed.

How do organizations take that minor league talent and turn it into a good team?  Do good minor league systems turn into successful major league teams full of homegrown talent?  Or do they also require significant talent from outside the organization?  The answers to these questions will come in Part 2.