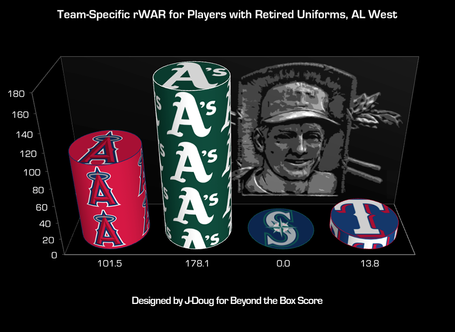 AL West teams are by far the least prolific when it comes to retiring numbers. This shouldn't be all that surprising: only the Athletics predate expansion, and they were awful for a very long time.

The Athletics and Angels have similar standards for the players whose numbers they retire: average team-specific rWAR for both is in the mid-30's.

The Rangers have retired only Nolan Ryan's uniform (more on him below), and he posted a mere 13.8 rWAR in a Texas uni.

Official Mariner policy is not to retire a numbers unless the player it belonged to has played five years for the team and has reached the Cooperstown plateau. Accordingly, the Mariners have not retired any uniforms (although they have yet to reissue Edgar Martinez's #11 or Ken Griffey, Jr's #24).

Nolan Ryan's uniform is retired twice among AL West teams: for the Angels and the aforementioned Rangers. Nolan Ryan's number is also retired on the Houson Astros, making Ryan the only player whose number has been retired on three different teams. 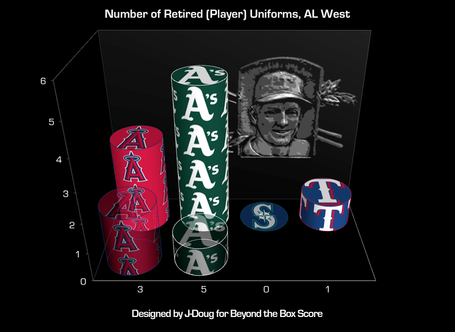 In addition to Nolan Ryan, Rod Carew and Jim Fregosi, the Angels have retired #26 in honor of Gene Autry--the original owner of the Los Angeles Angels--and #50 in honor of legendary coach Jimmie Reese. The A's have retired a uniform in honor of former owner Walter Haas to complement the retired numbers of Reggie Jackson, Rickey Henderson, Catfish Hunter, Rollie Fingers and Dennis Eckersley.