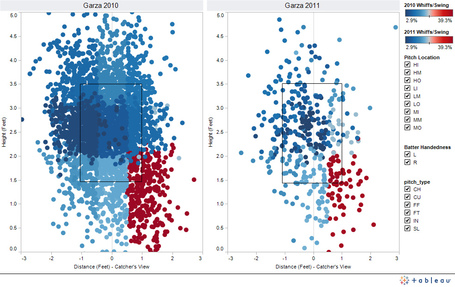 In a much discussed trade this off-season, the Tampa Bay Rays sent righthander Matt Garza to the Chicago Cubs for what most consider a valuable package of prospects. Garza had been a significant cog in the Rays' starting rotation since he was acquired from the Twins prior to the 2008 season.

In his first month with his new club, it's hard to get a handle on how Garza has performed. Why? Because his main statistics and peripherals are all over the board.

Garza currently leads all major league starters with 9.49 K/9-BB/9, almost a full 100 points higher than the next best pitcher, Cliff Lee. He also sports the most K/9 with 12.41, almost two strikeouts more per nine innings than Bud Norris of the Astros.

On top of all this he hasn't allowed a single home rune yet. This has earned Garza the best FIP and xFIP in all the land (1.27 and 1.93 respectively). But despite this apparent dominance, Garza has been hit pretty hard.

Garza came into this week sporting an absurd .471 BABIP, largely due to a league-leading line drive rate of 34%. Garza's 4.47 ERA is far from the worst among MLB starters, but given his FIP metrics it's hard to understand why he's getting hit so hard.

So what gives? I'm not entirely sure. I am far from a Pitch F/X guru like some of my co-authors, but I did try to visualize and cut the data a bit to see if there were any clues. The graphic above depicts Garza's 2010 and 2011 Pitch F/X data side by side. Each pitch has been coded as falling into one of nine zones (see here for more details) and color coded by the whiffs per swing for each location.

Garza has gotten hitters to swing at 35% of his pitches outside the zone with only 58% of those swings resulting in contact (top-20 in the majors). His swinging strike percentage is 10%, top-30 in the league. Given his league-leading K-rate it's clear guys are missing pitches. But not when Garza throws the ball in the zone.

Garza's 94% zone-contact rate is 6th worse in the league. Now, this isn't by itself odd, since there are a number of high strikeout pitchers sporting 90%+ z-contact rates. However, Garza's LD% is what's getting him into trouble. Below is the same graphic from above, but this time it depicts line drive percentage by location: 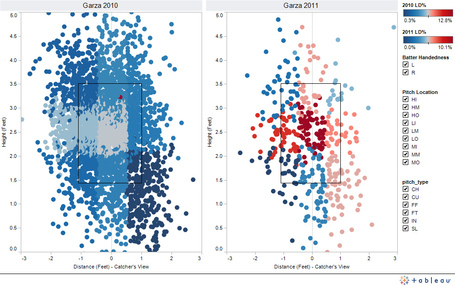 It does appear that Garza is allowing way more line drives in certain locations--for example, right down the middle. Batters are hitting a little less than 4% more line drives this year on balls down the pipe. Garza managed to get batters to whiff on 7% of pitches in that same location last year--this year, it's down to 3%. More importantly, batters are hitting more line drives (5.6% vs. 0.3%) on pitches that would be considered low and inside to left-handed hitters. This has led to a .118 SLG/swing on pitches in that area versus just .018 last year. Essentially, this is Garza's slider. Last year there wasn't a single line drive hit on this pitch in this location. There have been four already this year.

I also found that, last year, Garza's whiffs/swing and SLG/swing by location were negatively correlated (-.63) as were his whiffs and LD's per swing (-.75). This makes sense intuitively. However, if you look at the admittedly small sample size this year, the correlation between whiffs and SLG per swing is only .04. The correlation between whiffs and LD's is a bit better and in the right direction (-.22), but still far below last year. 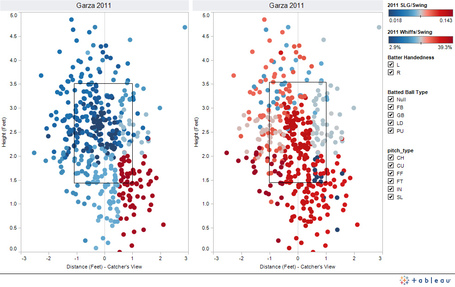 After all this I can't say I know what's causing Garza to appear so inconsistent. He's clearly getting guys to miss, but he's also allowing better contact in zones where he should be more dominant. Maybe this is just a function of the small sample (he's only thrown about 155 pitches so far this year and it's clear his BABIP will naturally regress), but it's still pretty weird.

The graphs above were created using an interactive visualization of Garza's Pitch FX data. The data was taken from Joe Lefkowitz's site.

The visualization can be found here. Feel free to play around. Note that while you can filter by handedness of batter and other factors the whiffs, LDs, and SLG/swing do not recalculate in terms of the color coding--that is static by pitch location (a tweak for another day). Each data point has tool tip information, so explore away.

Also, I did not use wOBA/swing because given Garza's lack of HRs so far this year the yearly comparison was just too out of whack to be helpful. The data does not include Garza's wild start last night. And there are a few minor issues (you'll see one or two data points that are out of whack) as well, but nothing that takes away from the over all message.