Expanding to a 10-team Playoff is a Bad Idea

Share All sharing options for: Expanding to a 10-team Playoff is a Bad Idea

This week, MLB comissioner Bud Selig stated that he was confident we would see a 10-team playoff format by 2012. Each league would get an additional Wild Card team, with both Wild Card teams squaring off in what amounts to a play-in series. Whether this would truly be a series (say, three games) or a single play-in game is unclear. (Scheduling-wise, the one-gamer would be preferable). Either way, I think this is a terrible idea.

There are a number of arguments for this change, not the least of which is to give a number of additional markets a reason to care during the dog days of September. But the one we hear most often is that it will revive the importance of winning one's division. If the Wild Card teams have to survive a short series (or single game) against each other just to make it to the Division Series, they'll play harder to win the division (so the theory goes).

Even if this is true, it's irrelevant. If what you care about is ensuring that the playoffs are structured in such a way so that, as much as possible, teams win based more on talent than random chance this change exacerbates the latter.

Others, more intelligent than I, have pointed out the inherent problem of random chance in playoff series--even those of the seven game variety. The good folks at Baseball Prospectus calculated the odds of different quality teams defeating each other in both 7- and 5-games series. What they demonstrated was that in a 5-game series even when you have a team with a .650 winning percentage playing at home against a .550 team, there is still a little less than a 30% chance that the inferior team will win just based on chance. 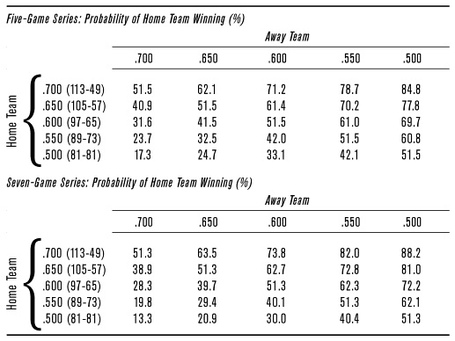 Extrapolating further, the shorter the series, the greater the likelihood that the inferior team could win simply based on chance. Now imagine if MLB decides to go to a 3-game play-in series, or a single game. Sure, it will add some excitement but it will increase the likelihood that an unworthy team will advance in the playoffs.

I could very well be overreacting, here. But given the inherent problems with the current playoff structure I don't think adding additional chance into the mix is advisable. If anything, we should be expanding the number of games for the Divisional, League Championship, and World Series. Going back to a 10-game series may not be perfect, but it would shift the odds in the table above further away from chance.