A PITCHf/x Recap of Coleman's Debut

Share All sharing options for: A PITCHf/x Recap of Coleman's Debut

What's with all these rookies in the Royals' bullpen?  We've already seen Aaron Crow, Tim Collins, and Nathan Adcock make their major league debuts in Kansas City, and on Thursday, the Royals brought yet another rookie reliever into the fun - Louis Coleman.  Coleman was drafted by the Royals in the fifth round of the 2009 draft and has pitched exceptionally well in his 120 2/3 professional innings, putting up 10.5 K/9 and 2.9 BBHBP/9 to go along with a 2.16 ERA.  This year, he posted 16 strikeouts in 7 innings at Triple-A Omaha.


Despite being a strikeout artist, Coleman does not throw hard and comes from a low three-quarters motion.  Here is a scouting report from Corey Ettinger of AL Central In Focus:

"His fastball, which sat in the high 80s in college works better out of the bullpen where he works in the 91-93 range and has shown gradual velocity improvement over the years, though I think he's maxed out what his delivery can do for him.  He pairs the fastball with a tight slider that gets good lateral movement with some sink.  The pitch is really tough for righties to pick up because it breaks late and he throws it from the exact same arm angle as the fastball.  They simply don't pick it up until it's too late."

Ettinger's report also mentions Coleman's developing changeup, which sits in the 82-84 mph range, a few ticks faster than his slider.
Although some PITCHf/x data for Coleman exists from Spring Training games, today I'd like to look only at his major league debut on Thursday against the Indians.

Coleman threw all three of his pitches in his two innings of work on Thursday, as you can see from the spin graphs below (don't hate me 'cause I can't do polar charts).  The first shows horizontal and vertical spin deflection from the catcher's perspective, and the second shows spin angle and velocity. 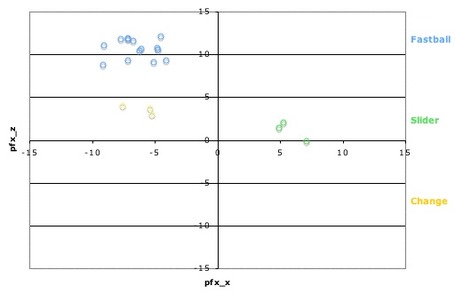 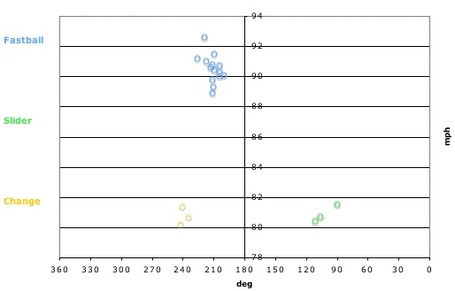 Even though there's not necessarily a whole lot to gain from dissecting results from just one outing, I've included a chart with some results from his three pitches.
Something I noticed was that Coleman seemed comfortable placing his fastball on the corner - outside to lefties, inside to righties.  From yesterday's outing, it would appear that Coleman likes to stay arm-side with the fastball and change (for the most part) and glove-side with the slider: 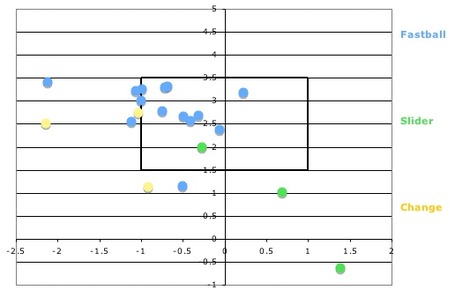 Despite his low-arm angle, Coleman's fastball has a fair amount of "rise" on it and doesn't look like a good ground-ball pitch.  His slider, which is of the sweeping "slurve" variety, looks like a legitimate strikeout weapon.  To put some video to the data here, check out some highlights from yesterday's game.

Data are from MLBAM and here are courtesy of Joe Lefkowitz's tool.