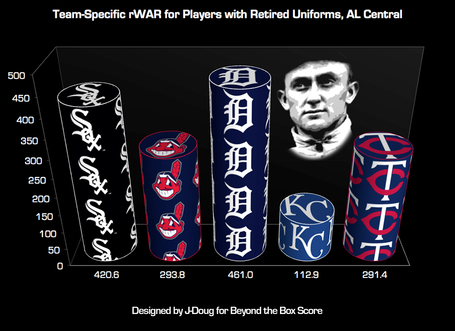 When it comes to retired uniforms in the AL Central, the White Sox and Tigers* are in a dead heat for the top spot in total team performance. The Indians and Twins are likewise neck-and-neck for third, while the lowly Royals trail (sorry as always, Kansas City fans).

*The Tigers' numbers include Ty Cobb, who of course never wore a number, but whose "uniform" the Tigers honor alongside less numerically challenged Detroit greats.

Detroit is also the most selective of the AL Central teams: the average team rWAR for a Tigers player so honored is 76.8, while the other teams maintain a standard between 40 45 and 50 60 rWAR. None of the AL Central teams have retired numbers of individuals other than players. In addition to George Brett and Frank White, the Kansas City Royals retired former manager Dick Howser's #10. 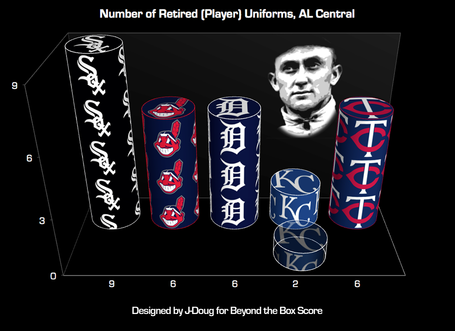 Also of note is the odd case of the Cleveland Indians' retired #455, in honor of their streak of consecutive games sold out at Progressive (née Jacobs) Field.

As this number does not represent an individual—and as retiring a triple digit number that has never and will never appear on a Cleveland Indians uniform is just plain silly—it is not included in the above chart.