Share All sharing options for: Knuckling Again - Unsuccessfully? What's up with R.A. Dickey

Last year R.A. Dickey was quite a bit of a revelation for the New York Mets.  While he clearly outperformed his peripherals, he still had a very good year highlighted by an excellent ground ball rate and low walk rate. This year, however, things seem to have changed.  Dickey's GB rate has dropped back to career norms and his walk rate has skyrocketed.  What's going on with him?

In my 3-part knuckleball series last year, I noted:

As we've said before there are three factors that lead to knuckleball success in the major leagues:
1.  The Range of Movement on the Pitch (Greater Range of Movement, the better)
2.  The Velocity of the Pitch (Greater Velocity is better)
3.  Control over the Pitch.
It seems to be difficult for a knuckleball pitcher to find a good balance between the three factors; after all, a large amount of movement may simply lead to a lack of control, negating any value that increased movement might bring.  Similarly, if increasing the velocity of the pitch reduces control, it might not be worth trying.

This year's struggles for Dickey appear to be related to factors 2 and 3.  This could be considered both positive and negative.

Lets go over each of the three crucial knuckleball factors.

The First Factor:  The Knuckleball's Movement:

Dickey's knuckleball seems to have basically the same range of movement in both directions so far this year as it did last year.  In other words, a change of movement on this pitch does not seem to be the cause of Dickey's problems.

Note, Dickey's sinker is sinking LESS than it did last year, but this is a small sample size, and it's hard to tell if this is just a fluke or what.

The Second Factor:  Control over the Knuckleball:

Knuckleball control is one of those things that's incredibly hard to figure out....because even the pitcher has no idea where the pitch is going once it leaves his hand.  He doesn't even attempt to throw at specific spots, he just lets loose and prays.

Despite this, Dickey managed to be quite impressive with his accuracy with the knuckler last year:  The slow knuckleball hit a wide strike zone 71.5% of the time, while the fast knuckler still hit the strike zone 69.5% of the time.  Those numbers are good for FASTBALLS, nevertheless an uncontrollable pitch.

This year however, both those numbers are down:  Slow knuckleballs are hitting the zone only 62.2% of the time while the fast variety is only hitting the zone 64.7% of the time.  A big decrease right there, and one which has a great deal to do with Dickey's worse performance thus far.

The question is: will Dickey's control improve?  Needless to say, this is hard to say.  I'd guess yes for two reasons:  First, 5 of Dickey's walks came in a start in Washington where he split a nail pitching in the first inning.  Second, in a ridiculously small sample size - his last 9 innings pitched - Dickey has only given up 2 walks (though 1 of those innings was in relief).

The Third Factor:  A Knuckleball Velocity:

This year the two knuckleballs' peripherals have not changed much aside from their in-strike-zone rate: the slow knuckler gets a similarly good but not great GB% of 45% while the fast one has gotten a GB rate of 64% (An awesome rate).  Similarly, the swinging strike rates are both still pretty good/solid.  However, Dickey's knuckleball usage has changed.  First, look at the distribution of velocity on Dickey's Knucklers this year: 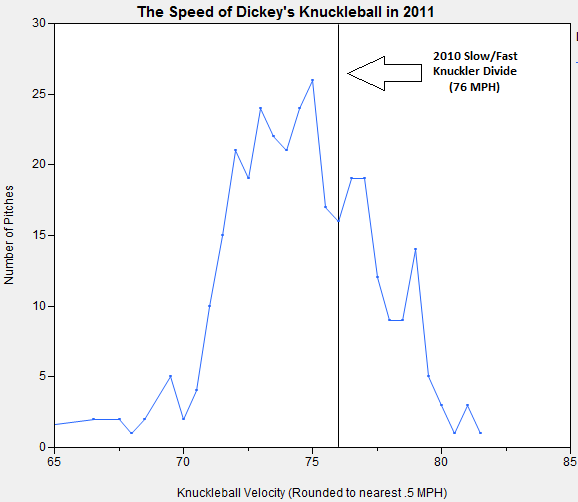 That black vertical line shows 76 MPH, where there was a clear divide in a binomial distribution last year (see THIS to see for yourself).  You can see essentially what seems to be the slow knuckleball clustering at the same point as last year, with it dropping off around 76 MPH.  But where last year Dickey was throwing the fast knuckler at an equal frequency (in fact, a greater frequency) than the slow knuckleball, this year, Dickey has thrown two times as many slow knucklers as fast knuckleballs.

Why is this occurring?  Well take a look at this next chart, which shows Dickey's knuckleball usage by count in both 2010 and 2011 so far:

As you can see on some counts, things look exactly the same: On 0-9 counts Dickey is still throwing mainly slow knucklers (though he's thrown a few more fastballs this year), while on 0-2 counts, Dickey once again is going near-entirely with the hard knuckler.  But there are clear changes so far on less strong counts: On 0-1 counts, Dickey's usage of the slow knuckler has basically doubled and it's also done so on 2-2 counts as well!  Heck, even on 1-2 counts, Dickey's going to the slow knuckleball much more frequently.

It's really not quite clear WHY Dickey is doing this.  But it seems quite silly - 0-1, 1-2, and 2-2 counts are favorable for a pitcher, and it would make sense for Dickey to throw the better pitch when the batter is more apt to swing.  It's possible this is a temporary thing - perhaps Dickey is worried about his so-far lack of control and thus is throwing the pitch that TYPICALLY he's been able to get in the strike zone during his career in these counts.  I really hope it's that and that it doesn't continue, for Dickey's sake.

One:  Dickey didn't come up till May last year, whereas now he's facing the cold weather of April.  This decreased weather could be the cause of some of the loss of speed (and control) - Mike Fast noted that fastball speeds are right now down .8 MPH according to Pitchf/x and some of that may be coming through here.  So perhaps the 76 MPH divide isn't quite right - but note the pitch count numbers seem quite normal on certain (0-2, 1-2) counts compared to last year.  Thus while this could account for some of the effect, not all of it.

Two, Dickey has introduced a rare super-slow (Eephus-like) knuckleball this year, all under 62.5 MPH.  But he's thrown it only 4 times and thus it's really not relevant at this juncture.

Actually Dickey's has had some worse performance on his FASTBALL as well as his knuckler so far in 2011.  In 2010, the pitch was a pretty good pitch, getting a ground ball 55% of the time (it had nice sink) despite its lack of speed.  In a limited sample (18 batted balls), it's only gotten 33% GBs so far.  Of course, otherwise, the pitch has been fine, but this deserves some special notice.

Dickey's pitch usage will need further watching.  I'm really  not sure why he's reduced his fast knuckleball usage and I don't understand WHY he's doing it.  If Dickey's control returns, as I hope (and guess) it will, he still won't quite be the same pitcher unless he returns to focussing on the hard knuckler as he gets into better counts, because the slow knuckleball just isn't as effective at anything, particularly at getting ground balls.