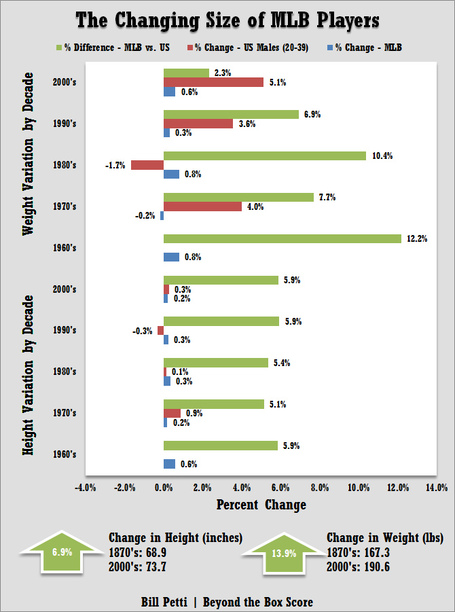 Last week, when I was putting together my post on the greatest short player of all time, I became curious as to how the size of players has changed over time. Generally speaking, adult males in the US have become bigger over time. But the question that came to mind was whether MLB players have grown at a greater, lesser, or similar rate than the general population.

Unfortunately, I don't have access to full data on the average height and weight of US males back to the 1870's, but I did find some data going back to 1960 that I've used to create the comparative graphic above*.

The average height of a major league player has increased almost 7% since the 1870's, from 68.9 inches to 73.7 inches. In terms of weight, the average ballplayer is almost 14% heavier than the average player in the 1870's, increasing from 167.3 lbs to 190.6 lbs. There was a pretty steep acceleration of player weight from the 1870s to 1900's, then a decline through the 1920's, and then a steady increase since 1930. Oddly enough, we don't see big jumps in weight during the advent of weight training.

Comparatively speaking, major league players have maintained a 5-6% height advantage over other US males every decade since 1960. What's interesting is that the gap between the average major league and US male weight-wise has shrunk dramatically since 1960, all the way from a 12% difference to just a tad over 2%.

The steady difference in height makes sense, since people cannot actively affect their height and any natural change in height should take longer than a decade to manifest.

Weight, on the other hand, can more easily be manipulated by people through exercise and weight training and diet. It's clear that the average US male has not simply packed on muscle since 1960, certainly not at a higher rate than professional ball players. The closing gap is a reflection of the poor eating habits, nutritional value, and decrease in exercise we see in the United States.

What's also interesting is the relatively mild changes in weight for ball players. Given the rampant use of steroids in the early 90's through mid-to-late 00's you might expect to see bigger jumps in weight. In fact, the changes in weight.

*Data on US males, 20-39, taken from the CDC (see here). I merged the averages for 20-29 and 30-39. Jim McLennan from SB Nation's own AZ Snakepit looked at this issue a bit last year and did find some data on height farther back than 1960, but the link is dead. Data for MLB player size taken from the Baseball-Databank Master file.